« Rhea Chiles' faith, grace and compassion remembered at funeral | Main | Syrian refugee in South Florida: 'We were scared of the bombs' » 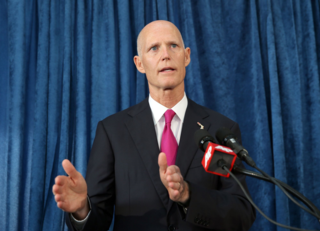 In the wake of attacks on Paris this weekend, Gov. Rick Scott on Monday demanded that Congress act to block Syrian refugees coming to the United States.

In a letter to U.S. House Speaker Paul Ryan and Senate Majority Leader Mitch McConnell, Scott wrote that the state would "not support the requests we have received" for Syrian refugees to resettle in Florida. However, Scott said, the state cannot prevent refugees from coming to Florida with federal support.

"More importantly, however, it is our understanding that the state does not have the authority to prevent the federal government from funding the relocation of these Syrian refugees to Florida even without state support," he wrote.

While the resettlement of refugees is governed by federal law, states administer many of the programs intended to help people land on their feet once they arrive in the U.S: employment assistance, health care, vocational training and English language courses, for example.

The Refugee Services program in the Florida Department of Children and Families is funded by the federal government. So Scott asked Ryan and McConnell to halt spending that could relocate up to 425 refugees currently awaiting support, at least until an "extensive examination" into the vetting process for refugees from Syria.

On Monday evening, before an event in Tallahassee, the governor said the state needs more information about how refugees are vetted.

"Why wouldn't you take your time doing this, especially when you know that one of them posed as as refugee?" Scott said. "And we're going to say, 'Oh, we're okay?' No. You slow down and make a good decision before you go forward."

Scott's letter came after several other Republican governors issued executive orders or made statements that they would oppose Syrian refugees relocating in their states on Monday in response to the attacks on the French capital last week that left 129 dead. Among them were Govs. Robert Bentley of Alabama, Greg Abbott of Texas, Asa Hutchinson of Arkansas and Bobby Jindal of Louisiana.

The attacks Friday have been linked to the Islamic State. France has already launched airstrikes against the group in Syria.

In September, the Obama administration announced that it would allow 10,000 refugees fleeing violence in Syria to resettle in the United States.

Speaking Monday morning at the G-20 Summit in Turkey, President Barack Obama called on world leaders to continue accepting refugees from Syria but only after "rigorous screening and security checks."

"We also have to remember that many of these refugees are victims of terrorism themselves. That's what they're fleeing," he said. "Slamming the door in their faces would be a betrayal of our values."

While Scott acknowledged that states cannot stop the federal government from settling refugees in their communities, some governors took a less-nuanced approach. Jindal, for example,issued an executive order invoking emergency powers granted to the Louisiana governor during "times of emergency or the threat of emergency."

But Shalini Ray, a University of Florida law professor who specializes in refugee and immigration law, says governors are generally powerless when it comes to accepting refugees.

"(Scott's) letter reflects the fact that states lack authority to bar refugees from resettling within a particular state," Ray said. "Moreover, states cannot constitutionally discriminate among refugees based on race or ethnicity, as many other governors are attempting to do today."

"By calling for the refugees fleeing Syria to be denied placements because of some perceived link between those fleeing violence and the perpetrators of that violence, Governor Scott is letting fear take control," ACLU of Florida Executive Director Howard Simon said in the statement. He continued, "By claiming in the wake of the tragedy in Paris that this vetting process is suddenly insufficient for Florida, Governor Scott is punishing refugees for the horrible attacks perpetrated by the kinds of terrorists they are trying to escape."

In the last year, the number of refugees from Syria rose, according to data from the Department of Children and Families, which manages services for refugees to the state.

Each one of those refugees goes through a rigorous screening process, Ray said, first by the United Nations High Commissioner for Refugees and then by federal agencies. All told, the process for a Syrian refugee takes two years on average.