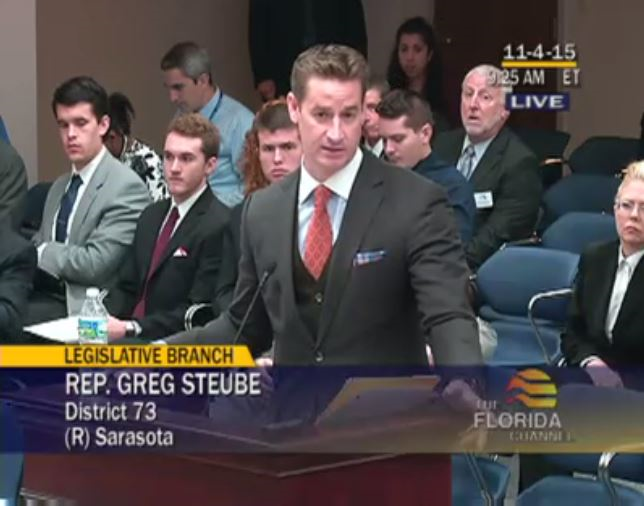 In its second of three committee stops in the House, a bill that would allow guns on Florida's college and university campuses garnered support again Wednesday, mostly along a party-line vote.

The proposal -- introduced by Rep. Greg Steube, R-Sarasota -- would allow the 1.4 million Floridians with a concealed-weapons permit to carry their weapons and firearms on college and university campuses statewide.

The legislation continues to draw passionate testimony from both gun-rights supporters and gun-control advocates.

However, public comment and debate was limited Wednesday because of time, and most of the 70 people who attended didn't have time to comment. The committee spent an hour and 20 minutes holding a workshop on textbook affordability, leaving barely an hour to consider the campus-carry bill -- which Democrats on the committee took issue with.

Supporters of the bill -- including Florida Carry and the Florida Students for Concealed Carry -- emphasized statistics that they say show concealed-carry permit-holders aren't likely to commit crimes. They argue the legislation would afford students, teachers and staff the ability to defend themselves against would-be attackers -- such as mass-shooters or rapists -- who, they say, already disregard the gun-ban that exists now.

Critics -- including college and university presidents, campus police chiefs and the United Faculty of Florida -- reject those claims as straw-man arguments. They argue that putting guns in the hands of untrained individuals potentially endangers the public, rather than making campuses safer.

"Guns in the hands of students and others with concealed-carry permits is not a rationale component of school safety," said Jennifer Proffitt, president of the United Faculty of Florida, which represents 20,000 teachers statewide.

The Council of Presidents for Florida's college system says it would cost colleges upward of $74 million in order to ramp up campus security and officer training, should the bill become law. Only four of the state's 28 colleges have armed security or police.

Eric Friday, general counsel for Florida Carry, said those purported costs are baloney because, he argued, why would Florida's colleges need to beef up their security for "law-abiding citizens" carrying guns on campuses?

The bill next goes to the House Judiciary Committee.

In the Senate, the companion bill (SB 68) -- sponsored by Sen. Greg Evers, R-Baker -- also has gained favor this fall in two committees: criminal justice and higher education. It awaits a third and final hearing in the Senate Judiciary Committee, where it stalled last year.

Unlike in the Senate Higher Education Committee, the House higher education committee did not accept cards for the record for individuals who were not present. During the Senate hearing two weeks ago, Students for Concealed Carry at the University of Florida* flooded the committee with comment cards in favor of the bill — although only about a dozen members were actually present.

*This post has been amended. It originally misidentified which group submitted multiple cards to the Senate Higher Education Committee. We regret the error.