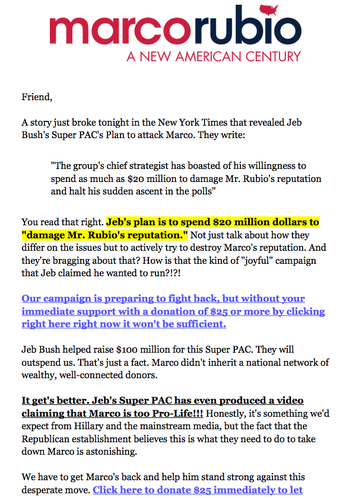 From the New York Times:

Any attacks on Mr. Rubio would come primarily from Right to Rise, the “super PAC” that has raised more than $100 million for Mr. Bush. Its top strategist, Mike Murphy, refused to detail its strategy but did not dispute that Mr. Rubio was in its sights.

“Part of running for president is you have to put your big boy pants on and get vetted on the issues, so we know we don’t have a dud candidate running against Hillary Clinton,” he said.

Rubio’s campaign pushed back, saying Bush was violating his “joyful” campaign pledge and then worked to raise money in defense.

It was during a debate in which Rubio said he believed in no exceptions for abortion.