On second stop of 'Jeb can fix it' tour, Jeb Bush emphasizes his results as governor 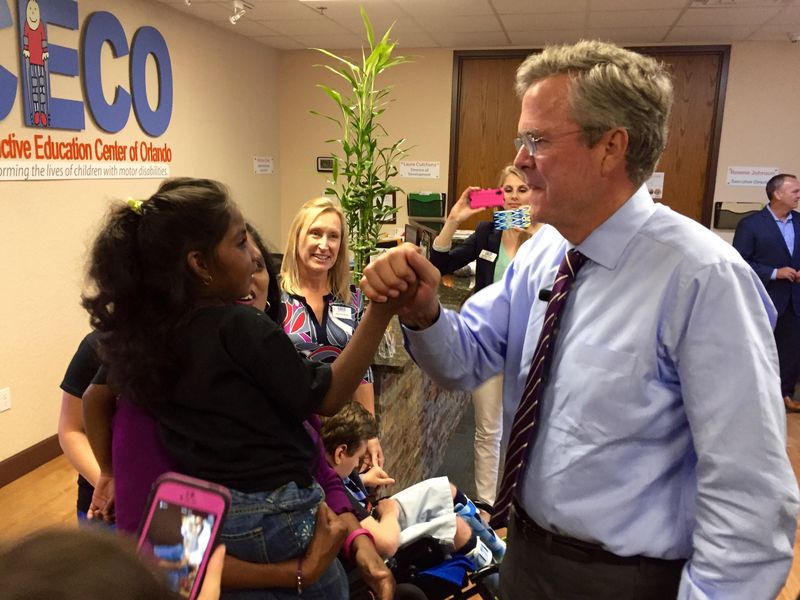 WINTER PARK –- In an effort to emphasize his commitment to education and supporting programs that help people with disabilities, former Republican Gov. Jeb Bush brought his presidential campaign on Monday to an Orlando area school for children with motor-skill disabilities.

His visit to the Conductive Education Center of Orlando was part of his “Jeb can fix it tour,” which also included stops Monday in Tampa and Jacksonville. The tour is aimed at highlighting Bush’s accomplishments as governor and rebooting what’s viewed as an underwhelming presidential campaign, marred by low poll numbers and lackluster debate performances.

Referring to his work with the Florida Legislature to fund programs that help people with disabilities -- such as the McKay Scholarship program -- Bush said, "I venture to say, because of the catalyst of my first year in office, that the programs for disabilities, for education, for health, for services is significantly better than many states."

“If you want to measure the depth of an individual, you look at his actions, not at what he says,” said Jennings, who served under Bush from 2003-07. “There’s something in Corinthians that talks about, it’s the empty wagon that rattles the loudest. Lordy, do we have some empty wagons out there! And it the full wagon that is quiet. Well, the full wagon is the one that has the ideas, and the policies, and the accomplishments to play it forward. That’s what we’ve got in Jeb Bush.”

During the event, Bush lobbed an indirect, but not-so-subtle, jab at his opponent Marco Rubio for Rubio's poor attendance record in the U.S. Senate. Bush praised Mica for briefly attending his campaign stop before leaving to catch a plane back to Washington for scheduled votes in the House this evening.

“I just want to make sure you go back to vote. That’s what you were elected to do, and you have a great attendance record,” Bush told Mica, chuckling.

Corcoran -- a Land O’Lakes representative who’s designated to be the next Florida House speaker starting in November 2016 -– also joined Bush earlier Monday in Tampa to announce his endorsement for the former governor.

Corcoran, who was Rubio’s legislative chief of staff, had previously not taken sides in the presidential race, but on Monday, he declared Bush “without question, the most courageous conservative in this race.”

“When you ask yourself who you think should be the leader of the free world, the absolute easiest decision for me was to say it should be Gov. Jeb Bush,” Corcoran told reporters in Winter Park. “It’s not against anybody else; it’s absolutely a statement for who I know can lead this country and put us back on a path to greatness.”

When asked by the Herald/Times whether he’d spoken to Rubio about his endorsement of Bush, Corcoran initially hesitated to answer, calling it “personal.”

“No, I have,” he then said. “Of course, I have. Marco’s a friend. Of course, I’d give him that dignity. I explained to him, as he knows full well, that I have tremendous respect for Marco … It’s nothing against Marco Rubio, nothing at all.”

The endorsement from Corcoran — who isn’t a nationally known name — will resonate more among Florida’s establishment than rank-and-file Republicans. Corcoran joins a list of current and former Florida House speakers who announced in September they were backing Bush. Those not endorsing the former governor are Rubio and Johnnie Byrd.

Bush spent less than an hour at the Conductive Education Center of Orlando. He began with a brief tour of the facility, guided by parents, children and staff. He spent five minutes addressing the crowd of about 60 people and another six minutes answering questions from the media, including about whether the Republican National Committee should still hold a planned primary debate with Miami-based Spanish-language broadcaster Telemundo.

He's now on his way to Jacksonville for another stop on his tour.