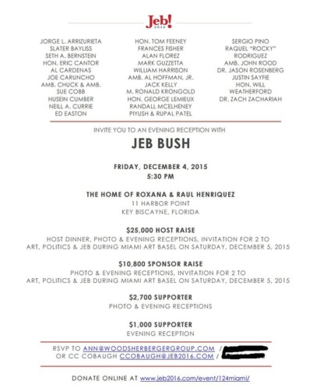 Jeb Bush's Miami-Dade County campaign invited loyal supporters Wednesday to the candidate's final local fundraiser of 2015, raising the stakes for the event ahead of the campaign's next fundraising deadline Dec. 31.

The reception will take place Dec. 4 at the Key Biscayne home of Roxana and Raul Henriquez. The minimum contribution is $1,000, with hosts committing to raise $25,000.

"It is critical that this event be the success we know it will be, as all eyes will be watching to see if our support has increased or not as we prepare for the first primary elections in Iowa and New Hampshire in mid February," Bush's county campaign chairman, Jorge Arrizurieta, wrote in the email sent with the invitation.