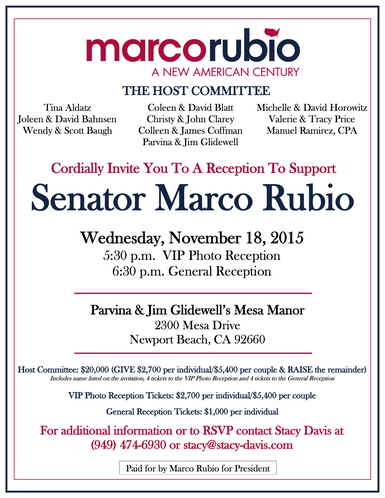 At 10 a.m. Wednesday, the Senate Foreign Relations Committee went behind closed doors for a briefing titled, “The Aftermath of Paris: America’s Role.” But Sen. Marco Rubio was not there. The Florida Republican is on his way to California for fundraising.

The absence illustrates how Rubio is not just missing floor votes but also key hearings on national security and foreign policy -- issues he has presented as chief credentials of his presidential campaign. He's also skipping a Paris briefing this afternoon for all senators. His office said he attended an Intelligence Committee meeting on Paris held Tuesday.

In recent months Rubio has missed a slew of Foreign Relations hearings and classified briefings, records show, aiding his critics.

In January, Rubio missed an intelligence briefing on ISIS and two other classified briefings because he was fundraising in California. In April he missed a closed Intelligence Committee briefing while in Texas raising money. And in September he missed a Foreign Relations hearing on the humanitarian crisis in the Middle East.

Records show Rubio missed numerous hearings in the years before he announced for president. Those meetings covered a range of issues, from a-Qaida to Iran and embassy security.

Rubio has said that he gets regular briefings from staff and sends surrogates to meetings he cannot attend. His office said Wednesday that a day earlier he attended an Intelligence Committee meeting on the Paris attacks. Such meetings typically are more in-depth and contain higher classified information than other briefings, such as the one for all senators today.

But he has exposed himself to criticism from all sides.

“While the rest of the world is focused on the terror attacks in Paris, Rubio is skipping critical briefings on national security to focus on high-dollar fundraisers,” said Christina Freundlich, a DNC spokeswoman. “Marco Rubio has a responsibility to do his job for his constituents and the nation as a United State Senator. If he doesn’t have time to be a senator while running for president, he should resign and give the job to someone who can actually focus on the threats we face. He excuses his poor voting record by saying the votes he misses don’t matter, but it’s especially galling when he’s missing national security briefings in order to attend ritzy West Coast fundraisers.”