« Does it take a year to process a refugee as Jeb Bush says? | Main | Marco Rubio says it's 'silly' to focus on his personal finances » 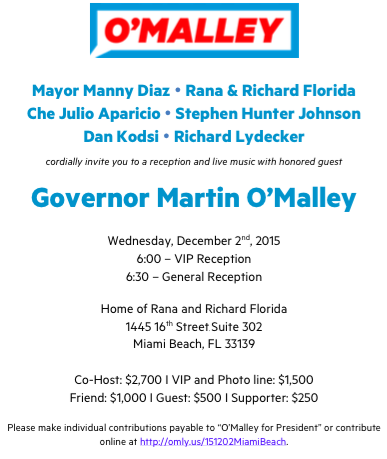 O'Malley, the former Maryland governor who is lagging in third place in the polls, is scheduled to attend a fundraiser Dec. 2 at the home of Rana and Richard Florida. Other event hosts include former Miami Mayor Manny Diaz, O'Malley's most prominent local supporter, and Diaz's law partner, former Miami-Dade Democratic Party Chairman Richard Lydecker.

Clinton will be fundraising in Florida from Dec. 1-2, including a Miami Beach reception.

Many well-heeled donors are expected in town that weekend, ahead of Art Basel Miami Beach, which begins Dec. 3.