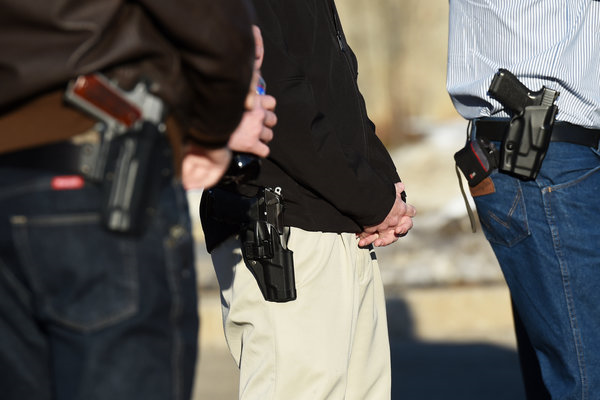 A plan endorsed by the National Rifle Association that would allow more than 1.4 million Floridians to openly carry firearms continues to garner support in the Republican-led Legislature, despite concerns from law enforcement groups and other critics about the absence of additional training or holstering requirements and other safeguards that they want included.

Gaetz said the “urgency” in adopting the legislation is “to fully vindicate the Second Amendment and the rights that Floridians ought to enjoy.”

"It doesn’t change who has the ability to bear arms," she said. "Our core responsibility is public safety, and are we truly allowing public safety when we allow someone to carry a gun when they’re walking down the street?"

Gaetz proposed several amendments to the bill -- which the committee approved -- in an effort to counter critics; the changes appeased some opponents, but not others. He said after the hearing that it's a "better bill" than before, but he admits there's more work to be done on it.

For instance, several lawmakers -- Republican and Democrat -- echo some law enforcement officials in wanting to require openly carried firearms to be holstered. But Gaetz said, before proposing such a regulation, he wants "to research the impact that has on public safety and the extent to which that burdens people's rights that we're attempting to vindicate."

Florida sheriffs and police groups strongly oppose the bill, as do state attorneys. They said an amendment Gaetz offered that requires gun-owners who carry openly to have the same training as concealed-weapons permit-holders isn't sufficient.

For instance, Gaetz again stated that 45 states allow open carry, because just five prohibit it altogether. But Gualtieri elaborated that those regulations vary widely from state to state in permitting, training and holstering requirements.

“There might be some that are as loose as this, but those states don’t look like Florida,” Gualtieri said, referencing Montana, North Dakota and Wyoming as examples.

<<< POLITIFACT: Is violent crime lower in states with open carry? >>>

Just 10 sheriffs out of the 67 in Florida are on record in favor of the open-carry bill. Liberty County Sheriff Nick Finch is among them, and he referenced the recent terrorist attacks in Paris, France to illustrate why open-carry is needed in Florida.

Meanwhile, critics also worry that an open-carry law might be a deterrent for visitors, harm the state's tourism economy and tarnish Florida’s image as a family-friendly destination.

In response to questions, Gaetz argued that it would have “no negative impact” on Florida’s tourism economy, because there's no data showing it harms tourism in states that already allow open carry.

Two of the Republicans who voted for the bill Wednesday -- Larry Ahern of Seminole and Mike Miller of Winter Park -- acknowledged they have reservations about the proposal, but said they trusted Gaetz would get those concerns resolved as the bill moves forward in the committee process. It now goes to the House Judiciary Committee.

The NRA and other gun-rights groups said the bill would strengthen Second Amendment rights and shield gun-owners from undeserved prosecution.

Marion Hammer, long-time lobbyist for the NRA in Tallahassee, said that without open-carry, concealed-weapons permit-holders “are in danger of being arrested and prosecuted like a criminal if your gun accidentally and unintentionally becomes exposed to the sight of another person.”

“I don’t want to be arrested if my jacket blows open and somebody sees my gun and calls police,” she said.

Hammer cited anecdotal cases, but no statistical data, about people who have been arrested for inadvertent open-carry. Gaetz acknowledged there's been a "small handful" of cases.

According to data compiled by the Florida Department of Law Enforcement and requested by the Herald/Times, 57 people statewide were arrested in the past 12 months for violating the state's conceal-carry permit statute. But agency spokeswoman Gretl Plessinger said there's no way to break that statistic down further to know how many of those arrests were for someone who might have accidentally carried openly versus them not having a permit or committing some other violation.

Business groups in Florida -- including the Florida Chamber and the Florida Retail Federation -- previously had concerns about the bill but are now on board with it, because of amendments that explicitly state the proposed law wouldn’t diminish the rights of private property owners to prohibit openly carried or concealed guns on their land or dictate whether and how their employees can carry.

Gaetz's bill is one of a couple gun-related bills that has had swift momentum in the Florida Legislature this fall. It earned initial approval in another House committee last month, as well as in the Senate Criminal Justice Committee. Gaetz’s father, Niceville Republican Don Gaetz, is spearheading the Senate version.

Another bill, which would allow concealed weapons on Florida’s college and university campuses, has also received much attention during pre-session committee hearings in both chambers. It faces its final vote in a House committee on Thursday morning.

In contrast, a third NRA-backed proposal that would enhance Florida’s “stand your ground” law faltered this week, when a House committee deadlocked on it. However, it continues to move ahead in the Senate.