The Florida League of Cities is mobilizing opposition to kill a legislative proposal to revamp the state's elections timetable in advance of a House vote this week.

The House State Affairs Committee is scheduled to vote Thursday on a bill that would shift city elections to the same date as statewide November general election dates in even-numbered years and to similar dates in odd-numbered years. Most cities hold elections in the spring when they often have the ballot all to themselves. The change is being pushed by Rep. Matt Caldwell, R-North Fort Myers, the panel's chairman, who says his goal is to inprove voter turnout in city elections.

The League of Cities wants its 400-plus members to turn up the heat on all 18 committee members to defeat the idea. Cities say it would trample on their home-rule powers and could produce longer ballots (meaning longer lines at polling places) and even less voter participation, because city elections would be at the end of the ballot, after all federal, state and local contests and proposed constitutional amendments. A league "legislative alert" to its member cities also says the nonpartisan nature of municipal elections would be threatened by the change.

"What the proposal is attempting to do is standardize all the election dates and make all elections be in November," said David Cruz, assistant general counsel for the Florida League of Cities. "We believe that that would pre-empt home rule authority to choose election dates. We also feel it would affect several factors dealing with terms of office."

A staff report on the bill says the change could increase the cost of government: "The (bill) may increase expenditures for municipalities that are required to amend their charters or amend ordinances to modify existing election dates," the analysis says.

Sen. Bill Nelson's longtime spokesman, Dan McLaughlin, will retire at the end of the year.

Dan McLaughlin, our Deputy Chief of Staff and Communications Director, is retiring at year's end after more than 21 years of outstanding public service, the last 15 of which were in the U.S. Senate.  He has decided to pursue opportunities in the private sector, including his passion for oil painting and Florida art. Dan has been my confidant and friend all these years, and is recognized in both journalism and communications as one of the best.

He is succeeded by Ryan Brown who, as Director of Communications, is hitting the ground running.

McLaughlin's decision follows recent news that Nelson's chief of staff, Pete Mitchell, is retiring -- but not before laying the groundwork for Nelson's 2018 re-election campaign.

Texas Sen. Ted Cruz was born in Canada to a Cuban father and American mother, That American mother, many legal scholars say, makes Cruz an American citizen, but the question of whether being born in Alberta, Canada disqualifies Cruz for president has dogged him for years. In May, 2014, he even formally renounced his Canadian citizenship.

PolitiFact has looked at this question repeatedly.

"The Constitution says 'natural born American.' So now we're counting Canadians as natural born Americans? How does that work. I'm waiting for the moment that he gets the nomination and then I will file that beautiful lawsuit saying that he's unqualified for the job, he's ineligible," Grayson said the other day on “The Alan Colmes Show" on Fox News Radio.

"Call me crazy but I think the President of America should be an American," said Grayson, whose main rival for the Democratic U.S. nomination is fellow U.S. Rep. Patrick Murphy of Jupiter. "Even the anchor babies actually were born here. He doesn't even meet that qualification." 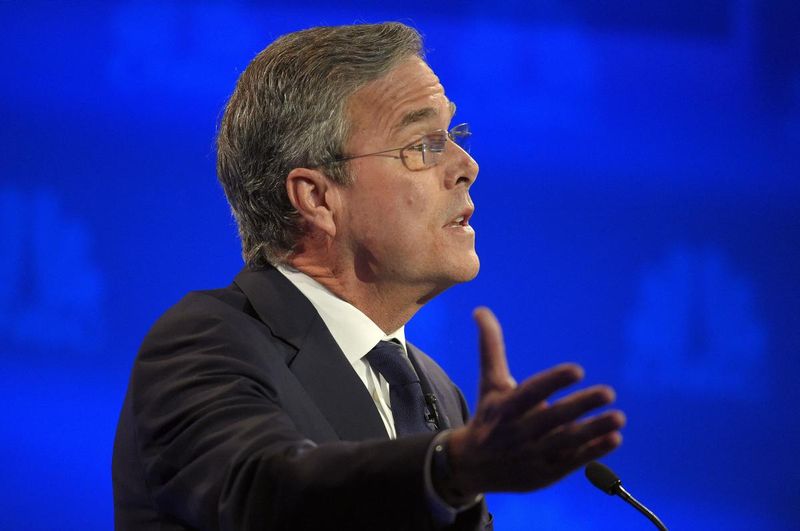 Here are the five most-read fact-checks from PolitiFact Florida in November, counting down to the most popular.

The 30-second spot portrays the Florida Republican as an outsider, highlighting his long-shot 2010 U.S. Senate bid (and not that he was first elected to state office in 1999).

"He took on the Republican establishment and won," a narrator says in the ad. "Don't just send the establishment a message. Send them a conservative president."

Warren Tompkins, the head of Conservative Solutions PAC, said in a statement that his group has raised enough money to start its ad buy earlier for the primaries, which start in February. The Super PAC had raised about $16 million as of June 30, the last time it was required to disclose its finance.

"While the strong start we had in the first half of the year allowed us to pre-buy ad time in the weeks leading up to the Iowa caucus and the New Hampshire and South Carolina primaries, Marco's growing support and our continued fundraising strength has allowed us to move our timeline forward, going up with additional air support to capitalize on momentum in the early primary states," he said.

"Conservative Solutions PAC's fundraising success means that this ad is just the first in what will now be a continuous television presence for the PAC through the end of the GOP primary process."

Posted by Patricia Mazzei at 9:38 AM in 2016 Election, Marco Rubio | Permalink | Comments 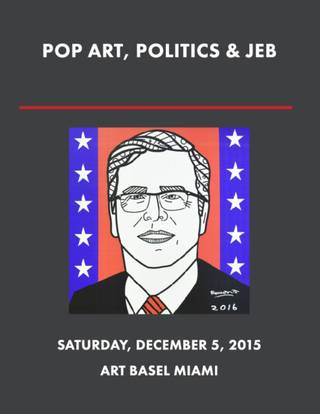 Ah, to be among the glitterati who will descend this week on Art Basel Miami Beach. Nibbling on canapés. Clinking glasses of bubbly. Perusing modern masterpieces. And … writing checks to politicians?

That’s the hope of several 2016 presidential candidates who, on purpose or by happenstance, have scheduled fundraising receptions to coincide with the annual art fair that swells the ranks of South Florida’s moneyed elite.

Republican Jeb Bush, who lives in Coral Gables, is the only one planning an art-themed affair Saturday — “Pop Art, Politics & Jeb” — organized by friend and Miami celeb artist Romero Britto, complete with a custom-made Britto portrait of the candidate with a background of white stars and blue-and-red stripes. Friday night, Bush donors will gather for a $1,000-a-head reception on Key Biscayne.

Democrat Martin O’Malley, the former Maryland governor and sometime guitar player, will appear Wednesday at a $250-a-head fundraiser with live music at a waterfront Miami Beach home so close to the fair that an email inviting donors reads, “If you are heading to Art Basel after, their house is right down the street from the Convention Center.” (About a mile away, but who’s counting?)

And Democrat Hillary Clinton, the former U.S. secretary of state, plans to be in town Tuesday, raising money in Miami Beach ($1,000 a head) and Pinecrest ($500) in a pair of receptions that fall the day before Art Basel opens its doors to invitation-only VIPs.

The fair itself isn’t involved in any political events. But has the Art Basel crowd — gasp! — gone political? 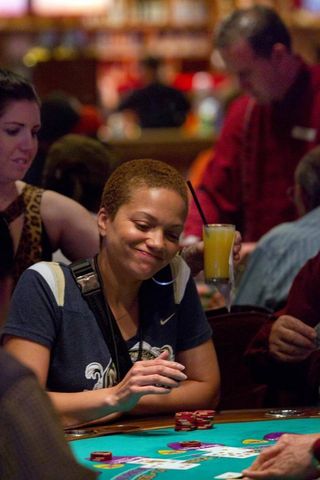 The deadline has passed for the Seminole Tribe to complete its negotiations with the state over whether it will be allowed to continue operating lucrative blackjack games at its Hard Rock casinos but the cards are still on the table.

The stakes are so high for all the parties involved in Florida’s complicated gaming landscape that legislators and the governor’s office are trying to negotiate a way to turn a deal on the card games into a blueprint for gaming across the state by the onset of the legislative session on Jan. 12.

Among the issues: the prospect of another slots casino in Miami, slot machines in Palm Beach and Fort Myers, a requirement that future gambling licenses get statewide voter approval, and the promise of $3 billion in gaming proceeds directed into the state treasury over the next 7 years.

Nearly a year after his release following almost five years in a Cuban prison, former U.S. contractor Alan Gross gave an interview to CBS' 60 Minutes about his captivity.

"It was terrible," Gross told CBS News' Scott Pelley. "There was it was a time of sensory deprivation for me, especially that first year. The place was infested with ants and roaches. I didn't have any meat, really, for five years."

Gross' wife, Judy, gave him a hint late last year about his upcoming release in a rare phone call.

"She couldn't say it in the clear on the phone," Pelley noted.

"No," Gross said. "But she was very clear in her wording n her verbiage that I was coming home."

And when he finally left, what did he tell his Cuban captors?

An earlier version of this post and its headline misstated who said, "'Hasta la vista, baby.'" It was Gross to his captors, not the other way around.

Here's a transcript of the interview, as provided by CBS:

Posted by Patricia Mazzei at 7:29 PM in Cuba | Permalink | Comments

In 1965, one year before signing the Cuban Adjustment Act into law, President Lyndon Johnson said, “I declare this afternoon to the people of Cuba that those who seek refuge here in America will find it. The dedication of America to our traditions as an asylum for the oppressed is going to be upheld.”

Clearly, the spirit of the Act was to assist Cubans who had to flee their homeland and could not return for fear of persecution.

However, unlike other immigrants seeking political asylum, Cubans can return home without jeopardizing their status. In no other instance are refugees or asylees allowed to return to the country they claim is persecuting them without fundamental political change in that country occurring first, or before becoming U.S. citizens.

This is an obvious inconsistency in the law, as several South Florida newspapers have repeatedly pointed out. Ignoring this flaw is detrimental to efforts to reform and preserve the law for those who truly fear for their safety and security in Cuba. Moreover, those who wrongfully take advantage of this law are abusing our country’s generosity and creating gross inequities in our immigration system. Economic immigrants from many other countries in our hemisphere who waited in line to come to the United States do not understand why Cubans, who openly admit they have come for economic opportunities, enjoy these privileges.

Jeb Bush: Listening to Donald Trump is 'kind of scary'

Appearing on Face the Nation, Jeb Bush continued to press his plans for taking out the Islamic State and drew a contrast with Donald Trump.

“In these really serious times, he’s not a serious leader,” Bush said of Trump.

”I have great doubts about Donald Trump's ability to be commander in chief. If you listen to him talk, it's kind of scary to be honest with you, because he's not a serious candidate."

Bush also said Trump was working the news media. "He knows what he's saying. He's smart. He's playing you guys like a fiddle, the press, by saying outrageous things and garnering attention."

In Sarasota on Saturday, Trump said Bush's campaign was "down in the tubes."