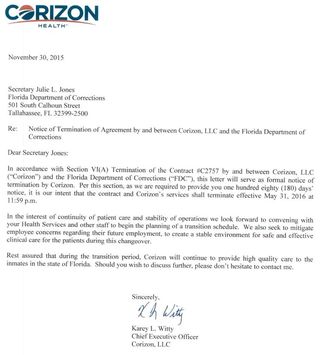 After two years of complaints about healthcare in Florida’s prisons, the private company that has been responsible for the largest share of inmate care — Corizon Health — decided not to renew its $1.1 billion contract with the state Monday, leaving the future of care for 74,000 inmates in limbo when the company pulls out in six months.

The decision by the Tennessee-based company to exercise its right to terminate the contract that was scheduled to expire in 2018 came as the Florida Department of Corrections was attempting to renegotiate the agreement amid reports of inmate maltreatment, chronic understaffing and rising numbers of unnatural inmate deaths.

"We appreciate the contracts for inmate health services permit very little of the flexibility that Secretary Jones would like in order to address issues such as staffing, mental health care, and electronic health records," Corizon Chief Executive Officer Karey Witty said in a statement. "We have tried to address the department's concerns but have found the terms of the current contract too constraining. At this point, we believe the best way to move forward is to focus our efforts on a successful transition to a new provider."

In February, Department of Corrections Secretary Julie Jones was ordered to renegotiate the contract by Sen. Greg Evers, R-Baker, chairman of the Senate Criminal Justice Committee, after a series of reports in the Miami Herald and other news organizations showed suspicious inmate deaths were covered up or never reviewed, staffing was inadequate, and inmate grievances and complaints of harmful medical care were dismissed or ignored.

The decision is a blow to the effort by several legislators and Gov. Rick Scott to privatize medical care in Florida prisons. After trying and failing to pass legislation to authorize the state to contract out its prison health care to companies who contributed heavily to Republican campaigns, a provision was quietly inserted into the 2011 budget during the governor's first term.

The language was challenged in court but ultimately was upheld and the contracts were allowed.

The contract requires that both companies provide medical care to inmates for 7 percent less than it cost the state in 2010, but both companies sought and received increases in the terms of their original agreement.

In 2014, former FDC Secretary Michael Crews agreed to raise the annual contract with Corizon and Wexford by $3.2 million. Subsequent audits revealed that even after the increased payments, Corizon failed to meet it contract obligations regarding staffing and medical care.

Evers asked the agency to renegotiate the contracts with both private prison providers to demand higher standards of care and hold them accountable for deaths and injuries. Jones also criticized the contracts as too lenient for the vendors and issued an invitation to rebid the contract on Feb. 23.

The department did not explain what will be next for the prison system, but said in a statement that updates would be forthcoming.

"In the coming months, Secretary Jones will work closely with the Department’s Office of Health Services to ensure that the appropriate staff and resources are available at our facilities to continue seamless delivery of appropriate medical care to our inmate population,’’ the statement said.

Evers said he was not prepared to comment on the decision but said he considered it a "good sign" that Jones was following through on directions to hold the company accountable for providing the level of care they agreed to when they signed the contract with the state.

"This is good news,’’ said Rep. Carlos Trujillo, R-Miami, who chairs the House Criminal Justice subcommittee that oversees prisons. He had been supportive of the effort to renegotiate the contract because "the health care outcomes were some of the worst in any sort of managed care."

"It’s a huge contract. People don’t’ walk away from this easily,’’ Trujillo said. "It further goes to show that the secretary is holding people accountable. Regardless of their reason for leaving, she’s forcing people to come to the table and push for the outcomes."

Trujillo said that the options include providing a “hybrid” system that would rely on private health care services in areas of the state where that is most efficient and return to in-house medical staffing in other parts of the state.