Redistricting redux: Oliva map, Dem gains and so much more to come 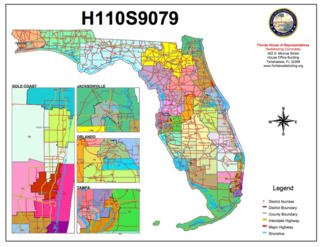 It's the first day of the third week of the three-week redistricting session today and the House Select Committee on Redistricting is set to meet from noon to four to decide how to bless the House version of a compromise map for the Florida Senate.

The committee has been silent for two weeks as it awaited the Senate to finish its work and send over its proposal. That ended bitterly last week as a divided Senate voted 22-18 to pass the map, which included a Miami-Dade redraw that did two things: made the Miami-based Hispanic majority seats more logically aligned but also helped to assure that incumbents Sens. Miguel Diaz de la Portilla and Anitere Flores didn't face each other.

When its comes to 22-18, that's the number of Republican to Democratic districts in the map being proposed by House Redistricting Chairman Jose Oliva, R-Miami Lakes, which is likely to get the thumbs up today in committee. That gives Democrats technically four more seats over the 26-14 divide today but, remember, Dems haven't always done that well in capturing seats in purple districts. No telling if this passes, that will change.

Meanwhile, there is no early end in sight. The House will be at this through Wednesday, when it is scheduled to vote out the map. The Senate will then take it up on Thursday and Friday. The trial court will hear arguments on Dec. 10, so don't expect the Florida Supreme Court to rule on the final Senate districts until sometime in January.

The biggest worry for legislators is violating the so-called "tier one" standards of the Fair Districts guidelines in the state Constitution. That is the provision requires that districts are not drawn to protect incumbents, political parties or to diminish the voting strength of minorities.

But this is where things get squishy. The Oliva map merges a handful of incumbents into seats with others but, surprise, most of them happen to be Democrats. How does that happen inadvertently? It didn't happen in the Senate map so the changes Oliva map led to Sens. Gwen Margolis, D-Coconut Grove, being drawn into the district of Diaz de la Portilla. Palm Beach Democratic Sens. Maria Sachs, Jeff Clemens and Joe Abruzzo are all drawn into the same Palm Beach County district.

Flores is paired with Democratic Sen. Dwight Bullard in a seat that is 75 percent black, although she could move into the open District 40, which is majority Hispanic.

Oliva said the changes he adopted where as a result of mashing up pieces of a map submitted last Tuesday by the challengers to the redistricting lawsuit, the League of Women Voters and Common Cause.

"We have what the plaintiffs have done and what I most want to see is a map that represents all parties but meets constitutional muster,'' he told the Herald/Times.

He said that by using the Senate map as a starting point, “I feel I have given deference to the Senate,’’ while selecting pieces of the plaintiff’s map “where they numerically improved things.”

But he took neither map in Miami-Dade, where Oliva rejected the changed pushed by Diaz de la Portilla, R-Coral Gables, that attempted to strengthen Hispanic majority districts by unifying Little Havana, his family’s stronghold.

But in the new Oliva map, Diaz de la Portilla retains his Coral Gables and Little Havana district but it stretches east to Coconut Grove, including the territory of Sen. Gwen Margolis, and becomes increasingly Democratic – as 53 percent would have elected President Obama in 2012.

Oliva said the Diaz de la Portilla’s plan was “numerically superior” over the original map proposed by the Senate. But he feared “all of the talk” of it being drawn to move Flores out of the same district as Diaz de la Portilla, “I believe was going to create complications with the court,’’ he said.

Yet, he contends, “it’s in large part the plaintiff’s South Florida,’’ he said.

“What we have achieved is an overall map that is numerically superior than the previous maps with less city splits and less county splits,’’ he said. “My hope is we can come to a bi-partisan agreement.”

Among the changes, he said was District 31, the African American minority majority seats in Broward County, now held by Sen. Chris Smith, who is term limited out.

Oliva also doesn’t like the plaintiff’s configuration for District 5, an upside-down U-shaped arrangement that merges Clay and Putnam, Bradford, Union, Baker, Columbia, Suwannee, Lafayette and Dixie counties. Instead, he returned to a configuration preferred by the Senate, splitting Alachua County and diluting Democratic strength.

“These are trade-offs,’’ Oliva said. “This entire process is a series of trade-offs.”

“My greatest goal was to have a map scrubbed clean of any tier one considerations,’’ he said, referring to the provision that bans lawmakers from drawing maps that favor incumbents or political parties. “I believe it was scrubbed clean of intent.”

Oliva also finds it troubling that the plaintiffs made a point of turning over 2012 and 2014 primary data in key districts only to submit a map that doesn’t use it.

“It contradicts their argument but it sheds light upon what we’ve been saying,’’ he said. “We have been reviewing their data and there are tremendous inconsistencies with it.”

“The perfect proof that it is not an easy endeavor is that the plaintiffs did not include it in their map,’’ he said. “Are they saying something for rhetorical benefit only?”

The plaintiffs claimed that if the Legislature were to update its data to include that detail, they could justify drawing a Hillsborough-centric minority majority district that doesn’t attempt to link black communities across TampaBay. Absent that data, they proposed a district that has a smaller percentage of blacks voting age population than the Senate’s proposed map – 51.3 percent compared to the 52.4 percent in the approved Senate plan.

Oliva complained that while legislators must submit to scrutiny over their intentions when drawing the maps, the plaintiffs are given less scrutiny.

“Outside parties have no scrutiny on their intent,’’ he said. “There is no purity anywhere.”

“In order to correct that, we needed to have a more more city splits,’’ Oliva said. But he said they adopted large parts of the map in ways that incorporated fewer county splits.

Oliva also rejected the plaintiff’s approach to Sarasota, and adopted the Senate plan of dividing that county.