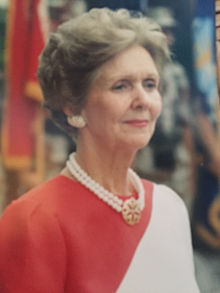 Rhea Chiles, 84, the wife of former Gov. Lawton Chiles who was an influential force in her husband's policy initiatives as governor and U.S. senator and an accomplished artist, died Sunday at her home on Anna Maria Island. She had been attended by hospice.

“Today is a profoundly sad, but also joyous day as we gather as a family to both celebrate and mourn the life and death of our mom, Rhea Chiles,'' wrote her children in a statement.

The former Rhea Grafton of Coral Gables met Lawton M. Chiles of Lakeland at a University of Florida Key Club convention in St. Petersburg and married in 1951. The family noted, the couple was "equal partners in the wonderful legacy they leave behind."

The governor's 40-year career in public service began in the state Legislature, where he served until 1969. Throughout his career, Rhea was active on the campaign trail and as a policy advisor.

When Lawton was a little-know state legislator in 1970 and decided to pursue a long-shot bid for the U.S. Senate, Rhea conceived the idea of walking the state. "You've walked all over Polk County, why don't you walk the state?"' she recalled later. "Next thing I knew, he was in a car on the way to Century."

His walk from the tiny Panhandle town to Key West would earn him the name "Walkin' Lawton." He wore out walking shoes every subsequent campaign.

The attention-getting strategy worked and his folksy gimmick propelled him to the U.S. Senate, where he served from 1970 - 1989. Encouraged by his long-time friend and subsequent running mate, Kenneth "Buddy" MacKay, Lawton Chiles returned to politics to run for governor in 1990, limiting contributions to $100 per donor.

After their pre-maturely born grandson nearly died, the couple made it a crusade to reduce infant mortality rates in the U.S. and Florida. In 1992, the governor created Florida Healthy Start to provide pregnant mothers with prenatal and infant care. In 1997, The Lawton and Rhea Chiles Center for Healthy Mothers and Babies was established to continue research and improve services.

Rhea Chiles also helped to conceive and focus on youth smoking cessation as part of the tobacco settlement her husband won with the tobacco industry in 1996. Using settlement dollars, they worked to create the platform for Students Working Against Tobacco or SWAT, which led to the statewide student-led Truth (anti-tobacco campaign). The Truth campaign resulted in a dramatic cessation of tobacco use among middle and high school students, and became a national model.

Rhea Chiles founded The Lawton Chiles Foundation in 1998, months before her husband's sudden death 23 days before he was to end his term.

Rhea Chiles was often her husband's "inner voice,'' the explanation he gave for often pursuing populist policies and strategies -- like walking the state, and limiting campaign donations -- that defied conventional wisdom. The governor's official portrait, painted by Tarpon Springs artist Christopher Still, includes a mirror in the background, with a reflection of Rhea Chiles.

During their years in Washington, Rhea Chiles founded the Florida House in 1972, restoring a 1883 townhouse located behind the U.S. Supreme Court into a welcome embassy that provides hospitality and information to Floridians visiting the nation’s capital. She served as president and CEO of the Florida House Board of Trustees from 1973 to 1988.

In the 1960s, Rhea Chiles was a founder of the Polk County Museum of Art, Lakeland, Florida, and during their time in Washington, she presided over the Congressional Wives Prayer Group and Co-Chaired the Ladies of the Senate Luncheon for First Lady Betty Ford.

She spent her retirement years on Anna Maria Island where she developed and managed The Studio at Gulf and Pine, a community cultural center.

"She passed today at 3:15 pm surrounded by many members of the family,'' her family said. "While she has faced health challenges over the last several years, up until the past three to four months she continued to do the things she loved best – enjoying family and friends, painting  and encouraging  others.

"She embraced life fully, right up until the end.  Now, she will join our dad in God’s protective embrace and for that, we are grateful and joyous."

Gov. Rick Scott said that he and his wife, Ann, were saddened by the passing of the former first lady.

"Rhea leaves behind a profound legacy of service and commitment to her family, community and state and our thoughts and prayers are with the Chiles family during this time of loss,'' Scott said in a statement. "May she always be remembered for the tremendous impact she made on so many Floridians.”

Former Gov. Bob Graham and his wife, Adele, who shared a lifelong friendship with the Chiles', said in a Facebook post Sunday that Rhea and Lawton Chiles "represented the best of public service."

They recalled how, shortly after the Chiles' moved into the Governor's Mansion, they invited the Grahams "to return to our former home and spend the night. That meant so much to us both,'' the Grahams wrote, noting that Rhea Chiles "so elegantly touched the beauty of our state home demonstrating clearly your artistic sensibilities."

The Grahams called the purchase and establishment of the Florida House "a forever gift for Florida and our nation." Referring to Rhea, they added: "We were blessed to have shared your friendship and much of our lives together."