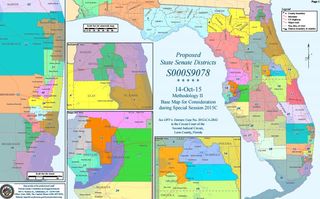 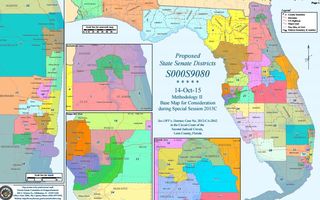 The Florida Senate offered the court yet another proposal for redistricting South Florida on Wednesday, submitting a configuration that merges pieces of a map approved by the full Senate with one that never got a vote.

The new configuration, chosen by Senate President Andy Gardiner upon the advice Senate attorneys, pieces together two different maps drawn by staff: S9090 (formerly S9078) -- the bulk of which was adopted by the full Senate, and S9080, a configuration that was rejected by three Miami senators and never came to a vote.

Gardiner rejected the configuration for Miami adopted drawn by Sen. Miguel Diaz de la Portilla that was voted upon by the Senate on a 22-18 vote, and instead choose a different version that was drawn by the staff.

The map stretches the African-American majority seat in held by Sen. Oscar Braynon, D-Miami Lakes, to Broward, including the cities of Cooper City, Davie, and Southwest Ranches. And in Palm Beach County, Democratic Sens. Maria Sachs of Delray Beach, and Joe Abruzzo of Boynton Beach are drawn into the same district. In all other parts of the state, the maps carefully avoids pitting incumbent senators against each other.

In a signal of how tentative the process is, an hour after the Senate announced its submission to the court, it issued a correction. It said that it made one minor change to map S9080 by adjusting the western boundary of proposed Districts 36 and 40 in Miami "to move from a canal to the adjacent roadway." The "technical change" moved 1,862 people from District 40 into neighboring District 39, Senate lawyers told the court.  Download Senate Corrected Notice (3)

The Senate plan will result in 32 members of the Senate, whose terms do not expire this year, to have to face re-election in 2016.

The court was left with the decision to decide the fate of the maps after the Legislature ended its three-week special session with no agreement on a proposed map. Legislators called themselves into session after agreeing to end a lawsuit by the League of Women Voters, Common Cause of Florida and a group of Democrat-leaning voters who alleged the 2012 Senate maps violated the anti-gerrymandering provisions of the Florida Constitution.

“When the bill failed, the Legislature was left without a map,’’ explained Katie Betta, Senate spokeswoman in an email. “At that point, the decision of what map to present to the court became a question of litigation, not legislative directive. Senate rules vest the authority to manage litigation in the Senate president.”

She said that Gardiner then decided to submit a map “that was the project of the base map process.

“This map addresses the concerns of the House, which elected not to take up map 9124 as passed by the Senate. This map also respects the Senate’s concerns with the House incorporating the Plaintiffs’ version of South Florida and its questionable minority performance by instead including a South Florida sandbox that was developed during the base map process."

Braynon said he objects to Gardiner and Senate lawyers submitting a map that never was approved by the full Senate. Although he voted against the map that did pass the Senate, at least it had the majority support, he said.

"It's pretty bold to submit a map that was never put before this body and say it is the map of this body,'' he said. "They are setting themselves up for the plaintiff's map to be accepted."

Diaz de la Portilla said he was also disappointed. "The Senate should have submitted [map] 9124 to the court, which is the map that the full Senate approved,'' he said.

Reynolds who will preside over a five-day trial Dec. 14-18 to determine what map to recommend to the Florida Supreme Court.. He said in an emergency hearing last week that he might consider putting together pieces of different maps like “a good seamstress.”

The challengers to the lawsuit are expected to submit their proposals for Reynolds to consider by midnight tonight. Two of their proposals have  previously been submitted to Florida legislators on the eve of a vote in the special redistricting session that ended two weeks ago.