Florida senators who could go under oath for redistricting trial include Flores, Diaz de la Portilla 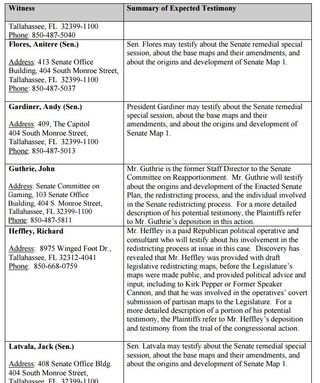 Sen. Anitere Flores and Miguel Diaz de la Portilla, both Miami Republicans, may be questioned under oath about the origins and development of the staff-drawn base maps approved by the Senate and submitted tp the court by Gardiner, R-Orlando, according to a lengthy witness list filed Monday with the court by the coalition of voting groups.

Also on the potential witness list are Republican Sens. Jack Latvala of Clearwater and Tom Lee of Brandon and House Redistricting Committee Chairman Jose Oliva, R-Miami Lakes. The plaintiffs list only Galvano, R-Bradenton, as a witness who will definitely be called.

A five-day trial is scheduled before Leon County Circuit Court Judge George Reynolds and the plaintiffs, led by the League of Women Voters and Common Cause of Florida, say they will show that the map proposed by the Senate was rife with attempts to protect incumbents, in violation of the anti-gerrymandering provisions of the state constitution.

The challengers also say they could call Republican political operative Pat Bainter, the head of the Gainesville-based Data Targeting, and his associates Matt Mitchell and Michael Sheehan. Other GOP political operatives who could be called are: Rich Heffley, Alex Patton, Marc Reichelderfer and Frank Terraferma.

"Discovery has revealed that Mr. Bainter was extensively involved in redistricting in Florida during the timeframe relevant to this litigation,'' the plaintiffs wrote in the witness list filed with the court on Monday.

They allege that among the "front persons" is Patton, a Republican consultant in Gainesville, who was questioned under oath about allegations that he and other GOP operatives were part of a carefully orchestrated attempt to stock the Legislature public hearings in 2011 with people who could influence the testimony.

“Why do I got to be the confused guy?” Patton wrote in an email uncovered by the plaintiffs. He would later forward to the Senate redistricting website a map from Stafford that purported to be Patton’s work but was drawn by other operatives. The plaintiffs’ attorneys allege that it was the work of Heffley and Terraferma and that it was ultimately included in major parts of the final Senate map. Heffley denies the allegations.

The Legislature and the plaintiffs have also agreed to a joint exhibit list that includes the 42 audio recordings of Senate and House staff as they drew several proposed maps, and the maps and statistics for the six base maps proposed by the staff members Jay Ferrin, Jason Poreda and Jeff Takacs. The three staff members, and Ferrin's predecessor John Guthrie, are also on the proposed witness list.