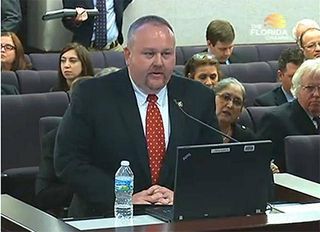 Gov. Rick Scott’s administration is tangled again in another public records issue with the Tallahassee attorney that won the $700,000 judgment against him for failing to turnover private emails.

Tallahassee lawyer Steven R. Andrews has asked the Department of Corrections to turn over seven months of search engine data of its chief inspector general as part of the legal fight several current and former employees have with the agency.

After waiting for more than three months, Andrews is now asking a court to intervene.

“People search for a lot of things on the internet and we think there is going to be a lot of things that are highly relative and valuable to our clients,’’ said Ryan Andrews, Steven Andrews’ son and a lawyer in the firm.

The employees have alleged that the agency’s chief inspector general, Jeff Beasley, has routinely covered up suspicious inmate deaths, inappropriate use of force and other questionable activities within the state’s prison agency.

Four of them who are investigators in the Inspector General's Office -- Aubrey Land, David Clark, John Ulm and Doug Glisson -- testified under oath before the Senate Criminal Justice Committee early this year and accused the inspector general of suppressing criminal charges and interfering with investigations of high-ranking prison officials.

Shortly after that, three of them were relocated and subjected to what Andrews says is a hostile work environment. All of them were investigated themselves, or had inactive internal investigations reactivated.

Department of Corrections Secretary Julie Jones has defended Beasley but announced he will be transferred to another position in the agency at the end of the year.

In August, Andrews asked the Department of Corrections to turn over documents and communications that would “reflect the internet search history” of Beasley’s cell phone and computer from Jan. 1, 2015 to Aug. 14, 2015.

The agency says it is in the process of completing the request but Andrews has to wait his turn and pay for his other outstanding requests first.

“We have an outstanding cost estimate that has not been paid for,’’ said McKinley Lewis, DOC spokesman. “The department delivered two cost estimates. We have acknowledged all of his records requests and are in the process of producing all of them.”

But Andrews considers that a delay tactic.

The request was part of a larger public records search that included 35 requests and three separate letters seeking personnel documents, calendars and emails, he said.

The department tallied up the costs – more than $1,700 -- and asked for a check. Andrews said he first wanted a list of emails to decide which to pay for and which he didn’t want. He is still waiting for that but, meanwhile, DOC has not turned over the other part of the request – the search engine results.

The agency told Andrews they asked Beasley for an update on the status of the search of his computer and would “inform” him when they had it.

“It is unclear if DOC ever began any sort of search to produce the records sought from Mr. Beasley’s computer, or his cellular phones,’’ Andrews told the court.

His firm represents a growing number of disgruntled corrections employees who are alleging unfair labor practices at the agency, said he considers it ironic that the agency can’t turn around an internet search more quickly when his clients – inspectors who conduct the internal investigations – routinely can produce a spreadsheet on the internet activity of FDC employees they’re investigating in a week.

“They may have an employee doing something unbecoming on their computer and they go to the technology department, get the internet search history and I’m under the impression it only takes a week or less to produce the results in a spreadsheet,’’ he said.

Lewis said the state’s retention policy does not specifically list internet searches but the agency considers them the same as a computer log -- which is required to be retained only for 30 days.

Andrews disagrees. He argues that an internet search should be considered "the same as metadata for a word document or a pdf, in which case they are required to retain the document in its original form.”

“I know they have the ability to go back much longer than 30 days because they do it for internal affairs investigations of department employees all the time,’’ he said. “A judge is just going to have to sort this out.”

Steven R. Andrews settled a lawsuit against the governor and Cabinet in June for $700,000 after alleging they violated a contract he had to purchase a building near the Governor’s Mansion in 2012 and accusing Scott of creating private email accounts to conceal the deal and other government communications.