Did Marco Rubio really 'pioneer' an anti-Iran measure in Florida? 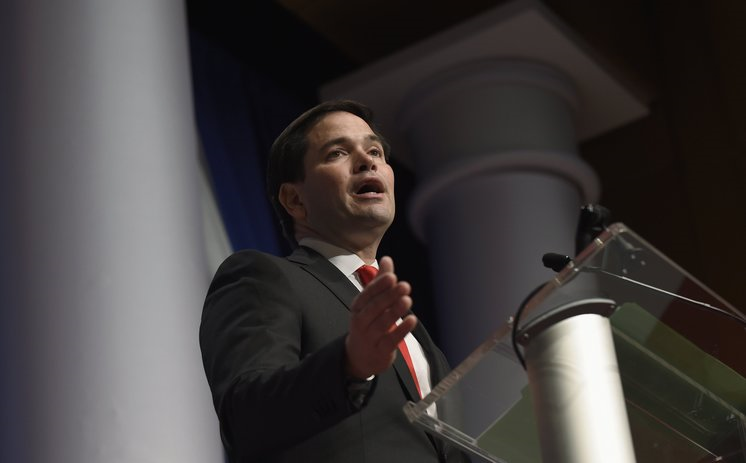 WASHINGTON -- Speaking before dozens of influential Jewish Republicans here last week, Marco Rubio lashed out at President Obama’s foreign policy and vowed, “When I am Commander-in-Chief, I will fortify our alliance with Israel.”

Applause filled the room and Rubio sought a deeper connection. “As speaker of the Florida House,” he said, “I pioneered what became a national effort by requiring the Florida pension program to divest from companies linked to Iran’s terrorist regime.”

It was groundbreaking, but Rubio had nothing to do with creation of the legislation.

“If pioneering means allowing a bill that I wrote and passed through the Florida Senate to come to the floor for a vote in the House, then I guess you could say he’s a pioneer,” then-state Sen.Ted Deutch, a Democrat from Boca Raton who now serves in the U.S. House, told the Tampa Bay Times when asked about Rubio’s boast before the Republican Jewish Coalition.

The legislation — Protecting Florida’s Investments Act — required divesting pension funds from companies doing business with the petroleum sector in Iran and the government of Sudan. The state pension fund had $833-million invested in targeted businesses affiliated with Iran.

"The president of Iran, Mahmoud Ahmadinejad, will learn today that Florida intends to lead the economic battle in the United States against a region that wants to (destroy the United States and its allies, Great Britain and Israel), " Deutch said on the day it unanimously passed the Senate in April 2007.

The legislation moved to the House, where a bipartisan group of Jewish legislators sponsored the companion. It passed 118-0. Gov.Charlie Crist later announced his intent to sign the bill while on a trade mission to Israel. and he singled out Deutch and other lawmakers, including lead Republican Rep. Adam Hasner and Democrat Rep. Ari Porth.

Rubio was not mentioned by Crist or in news reports. His speech last week was at least the second time he appeared to take credit for the initiative.

“As Speaker of the Florida House, I led our state’s push to stand with Israel by requiring the Florida pension program to divest from companies linked to the terrorist regime in Iran,” Rubio said in a Dec. 1 news release about a Senate resolution supporting state and local government efforts to enact sanctions against Iran.

Asked about Rubio’s role at the time, a spokesman, Alex Burgos, said: “When Marco was Speaker of the House, he and the Legislature made Florida the first state in the nation to sanction Iran by divesting pension funds from companies that do business there and prop up the regime. He gives credit where credit is due to all who made this bipartisan effort possible, including Congressman Deutch.

“As Florida's senator, he's now focused on making sure President Obama's dangerous nuclear deal doesn't undermine what our state and others have done against Iran, until a new president can end the deal entirely.”

Hasner, one of Rubio’s top campaign officials in Florida, acknowledged the former speaker was not behind crafting of the bill. But he added, “If you look at it and say, ’It’s the first bill in the nation to ever get passed to divest pension funds from companies that do business in Iran,’ then yes it is pioneering and as speaker he helped make it possible.”

A Republican and Democratic source said the effort did encounter some resistance from the head of the State Board of Administration, which oversaw the pension, but that appeared to be about who calls the shots, not the substance of the bill.

Rubio has moved aggressively to show his devotion to Israel. In 2010, Sen-elect Rubio flew to Israel with Norman Braman, the Miami billionaire who has supported Rubio over the years and has given millions to a super PAC supporting the candidate. Rubio has continued his focus on Israel in the years since and has won over many supporters as a result - a bond unlikely to be shaken by his overstatement about the 2007 legislation.