Donald Trump to Republican Jewish Coalition: You won't support me because I don't want your money 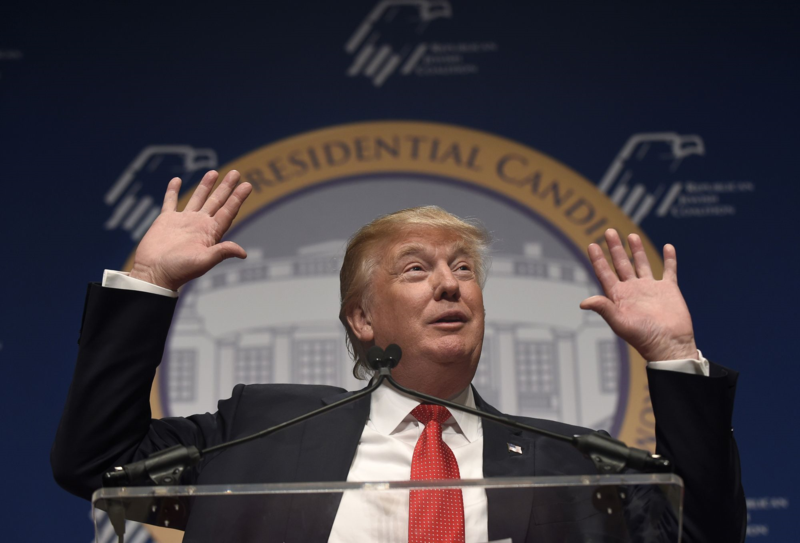 WASHINGTON -- It was hard to keep track of the number of times Donald Trump typecast Jews in a speech Thursday to the Republican Jewish Coalition.

"You just like me because my daughter happens to be Jewish," Trump began, referring to his eldest daughter, Ivanka. "The only bad news is that I can't get her on Saturday."

"I was the grand marshal of the Israel Day Parade at a very dangerous time," he continued.

But, Trump concluded: "You're not going to support me even though I'm the best thing that could ever happen to Israel. It's because I don't want your money."

Trump, who was introduced by a supporter from the Republican Jewish Coalition's board as a "mensch with chutzpah," made repeated, dismissive references to political donors, who comprised many of the people in the room. Trump insisted that he's self-funding his presidential campaign, though most of his campaign money has in fact come from donations.

"You want to control your own politician -- that's fine, good," Trump said, noting he too was once a donor. "Five months ago, I was with you!"

He used former Florida Gov. Jeb Bush as an example of a candidate "totally, totally controlled by the people who gave him money" and bragged about branding Bush as "low-energy."

"It's become so defining, it's like he has it written on his forehead," Trump said. "It's sad!"

The crowd -- many of them early Bush supporters -- laughed, sometimes amused, sometimes uncomfortable. Trump was booed when he didn't commit to pushing for making Jerusalem Israel's capital instead of Tel Aviv. ("Who's the wise guy?" Trump asked. "Do me a favor: Just relax, OK. You'll like me very much, believe me.")

Trump didn't back away from a statement he made to the Associated Press suggesting Israel might have to "sacrifice" to achieve peace with the Palestinians, though he did soften his tone in front of the passionately pro-Israel audience.

"Israel has given a lot but hasn't been given a lot of credit for what they've given," Trump said.

Trump seemed to revive his past claims questioning that President Obama was born in the U.S. and is a Christian. Referring to "radical Islamic terrorism" and the mass shooting in San Bernardino, California, a day earlier, Trump mentioned Obama: "There's something going on with him that we don't know about."

He made no mention of Rubio, who had attacked Trump earlier (without using his name) in his own speech to the Republican Jewish Coalition. On Wednesday night in Virginia, Trump portrayed Rubio as inexperienced and absent from his job.

"How would you like to be in Florida? You invest in a young guy -- he's a U.S. senator -- from Florida, and he's in there about 12 seconds and decides he wants to run for president," Trump said. "How would you like a guy who doesn't vote?"

On Thursday, Trump referenced his massive rally Saturday in Sarasota and compared his crowds not to any of his opponents' -- but to musician Elton John's.