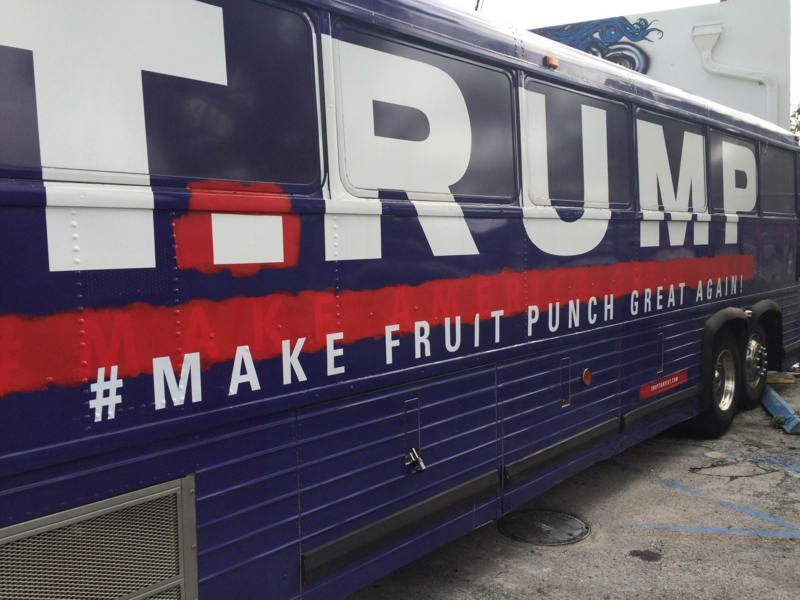 Donald Trump may want to fire the staffer who let his old Iowa campaign bus fall into the hands of a lefty artist from Philly.

The anonymous artist, known as t. Rutt, bought the bus for $14,000 from the businessman who owned it -- Trump was just leasing -- and turned it into a traveling anti-Trump art show.

The 1981 MCI motor coach's latest stop is Wynwood, where it's in town for Art Basel until Sunday at the Conception Art Fair, near the corner of Northwest 29th Street and Northwest Sixth Avenue.

"Presidential campaigns can be such a frustrating process," said David Gleeson, director of the Philadelphia-based gallery Crane Arts, which represents t. Rutt. "The idea behind this show is that you can either get frustrated and angry or you can get frustrated and creative."

The artist repainted the bus' banner on one side to read "T. RUMP" instead of "TRUMP." A banner on the other side says #MakeFruitPunchGreatAgain, replacing Trump's more familiar slogan, #MakeAmericaGreatAgain.

Visitors are encouraged to throw small cups of fruit punch onto the bus.

T. Rutt is an homage to R. Mutt, the name French artist Marcel Duchamp signed on his famous piece Fountain, a porcelain urinal he bought from a manufacturer and presented to the public as art in 1917. The piece launched the avant-garde Dada movement.

Trump's campaign had been leasing the 14-seat bus from Des Moines businessman Steve Drake, who wanted to sell. When The Donald declined his offer, the company sold to t. Rutt instead, Trump lettering on the side and all. (The campaign did not respond to a request for comment but several media outlets have confirmed the account.)

The bus comes with 14 seats, two couches, a working bathroom, speakers and about 1 million miles on the gauge. It only gets about 8 miles to the gallon, said Gleeson, who picked up the bus in Iowa then drove it to Miami via Philadelphia.

"I have to say that I love this old bus like a stray dog," he said.

There's no asking price for the piece but Gleeson said he would be open to offers down the road. But first, he's planning on taking it to New Hampshire for the presidential primary in February.