« Donald Trump: Ban Muslim immigration to U.S. | Main | A push to crack down on credit card skimmers at gas stations »

Gardiner: Still no plans to include card games compact money in 2016 budget 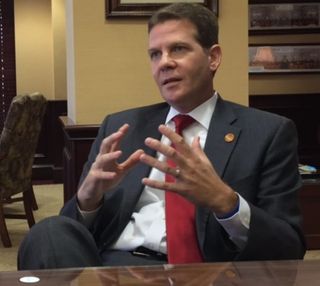 Senate President Andy Gardiner said Monday that it remains unlikely that the House and Senate will renew the banked card games portion of the gaming compact with the Seminole Tribe in time to include the money in the 2016-17 budget.

"We’re certainly not anticipating it,'' Gardiner told the Herald/Times at a pre-session interview for the legislative session that begins Jan. 12.

He said that for a deal to be reached in time for the 2016-17 budget year, lawmakers would need a resolution “certainly by the beginning of session” because of the many hurdles involved in reaching agreement on the plan.

The Legislature must ratify any agreement between the tribe and Gov. Rick Scott. Any ratifying legislation is expected to be used by both gaming opponents and proponents across the state to insert provisions that help their cause. Among the many issues on the table, for example, is the prospect of allowing slot machines in Palm Beach County while requiring that any future expansion of gambling get statewide voter approval.

"Unless there was a drastic change, I don’t  think we would include it either way,'' Gardiner said. "We’re anticipating it not being there. But you could have something filed the day before session and we would still have opportunity.”'

Gardiner asked Sen. Rob Bradley, R-Fleming Island, to remain the Senate's point person on negotiations with the Tribe and, while he has heard from Bradley that they are “still talking,’’ few details have been worked out, Gardiner said.

“I haven’t seen anything in writing. You hear concepts,’’ he said.

Gardiner, a long-time gambling opponent, last year signaled that he did not believe the banked card games portion of the 20-year compact that expired in July 2015 should be renewed. He has remained open to hearing the proposals being discussed by Bradley, the House's lead negotiator, Rep. Jose Felix Diaz, R-Miami, the governor's general counsel Tim Cerio and the Seminole Tribe. The current proposal, which expires in 2030, includes the proposal that has given the tribe the exclusive right to operate black jack at five of its seven casinos in exchange for more than $100 million in revenue sharing with the state each year.

But, Gardiner warned, many hurdles remain to get the votes needed, starting with the Senate Regulated Industries Committee.

“If a compact is brought forward to regulated industries, maybe we could sell tickets to those meetings,'' Gardiner joked.