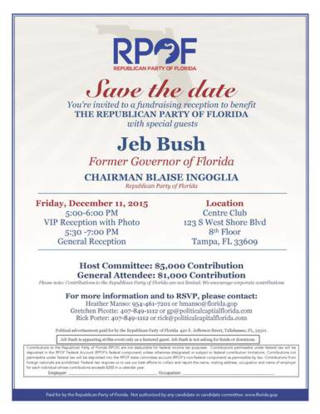 You might think Jeb Bush has enough on his own plate, but Florida's former governor and struggling presidential candidate is stepping up to raise money for the Florida GOP.  That's more than even current Gov. Rick Scott is doing for his state party these days, as Scott  is raising money only for his own political committee.

Keep in mind that Florida House Speaker Richard Corcoran is currentlly the only top elected official in Florida helping raise money for the state GOP, and Corcoran is a Bush supporter, even though he had been Rubio's top adviser in the legislature.

"Jeb has always supported the RPOF," Bush campaign spokeswoman Kristy Campbell said. "The Chairman asked the Governor a little while back to help raise funds for the party and he is glad to. A strong party infrastructure Florida is critical to Republicans’ success in 2016."