« Was the timing of the congressional redistricting ruling intended to influence the Senate trial? | Main | Donald Trump: Israel might have to 'sacrifice' for peace. Marco Rubio: That's 'dead wrong' » 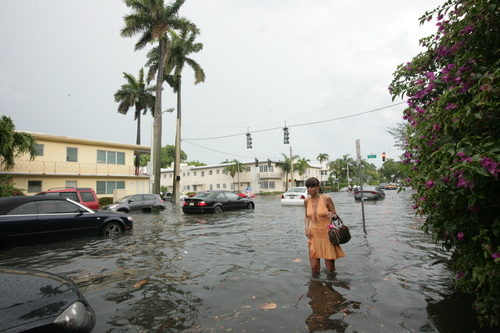 On the last day of a three-day Key West summit on climate change in South Florida, local lawmakers said they are chipping away at problems tied to rising sea levels and a host of ills linked to a warming planet, as long as they call it something else.

"You’re not allowed to talk about climate change. I don’t think that’s literally the policy, but because of the environment, you're not allowed to openly engage," said State Rep. José Javier Rodríguez, a Miami Democrat.

Rodriguez, along with State Rep. Kristin Jacobs, D-Coconut Creek, said in addressing woes projected for the state - from declining coral reefs to a six to 12-inch rise in South Florida seas in the next 15 years - they struggle to delicately describe it as something else. Finding money for projects, they say, is easier than changing policy. Just don't mention the dreaded C words.

"Everyday we’re seeing people accept things that I didn’t think they would," Jacobs said. "Who would have thought Republicans would be for passing marijuana?"

By not calling it climate change, Rodriguez said the local delegation, both Democrats and Republicans, hope to nail down Amendment 1 money for land and water conservation projects. Last year legislators spent the money largely on administrative matters, prompting four environmental groups to claim that at least $237 million was illegally diverted and sue lawmakers in Leon County circuit court.

One bill winding through Tallahassee would require at least 25 percent of the money go to Everglades Restoration, a critical piece of sea-rise fighting work that could help ailing Florida Bay and vulnerable South Florida water supplies.

"As much as we can get in the budget by not calling it climate change, that’s what we should be doing," Rodriguez said.

The delegation is also working to draw in other lawmakers. "There was nobody in the room from Southwest Florida, the Panhandle, the Tampa area and for no good reason," he said.

While not a big policy shift, Jacobs said she is pushing to better coordinate efforts statewide with a bill that would require every department to report on climate-related problems. The information would be compiled in an annual report to legislators and posted on a web site, she said.

"It’s a baby step. It's not really sexy," she said. But it may help provide proof for a long-term plan for the state, something the Scott administration has so far failed to do. Still, she said the region probably shouldn't count too much on outside help.

"The state and federal government aren’t going to come save us," she said. "It’s us."