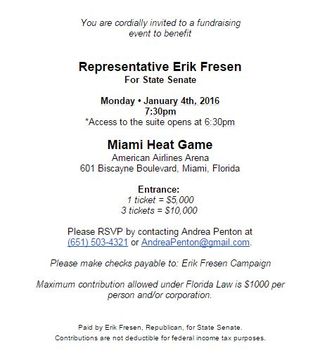 According to an email invitation to the event, Fresen is hosting a suite during the game against the Indiana Pacers with entrance costing $5,000 for one ticket or $10,000 for three tickets.  Download Fresen-Heat Game

Individual or corporate donations to candidate committees are limited to $1,000, under Florida law. However, Fresen also has a political committee, "Floridians for a Strong 67," where he's raising money as well.

Guests at Fresen's fundraiser are asked to make contributions to "Erik Fresen Campaign."

Fresen started raising money in July toward a 2018 bid for the state Senate seat currently held by Sen. Miguel Diaz de la Portilla, who would ordinarily have been termed out that year from seeking re-election.

But with new Senate districts finalized in a court ruling yesterday, some sitting lawmakers and future Senate contenders are re-evaluating their options. All 40 Senate seats will be on the ballot in 2016, with a lottery deciding which seats will be for initial two-year terms or for four-year terms.

Fresen, chairman of the House education budget committee, cannot run for his House seat again because of term limits. He told the Herald/Times on Thursday that he plans to run for the new District 35 whenever Diaz de la Portilla either is term-limited or chooses not to seek re-election. Fresen and Diaz de la Portilla both live within that new district, as does Sen. Gwen Margolis, D-Miami.

"I would never run against my good friend, Sen. Diaz de la Portilla," Fresen said via text message. "He represents our district very well. I will, however be running for the new District 35 whenever it becomes open and/or he is not running."

With all seats on the ballot next year and depending on the term set for the new District 35, Diaz de la Portilla could pursue another two or four years in office -- scenarios that could affect which election Fresen will target his ongoing fundraising efforts.