« Years later, lucky lawbreakers win pardons from Scott and Cabinet | Main | If you're in Miami and want to chat presidential politics... » 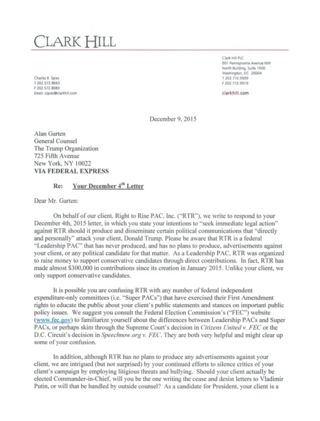 "Although your client may think he is above the law and be accustomed to using lawsuits to bail out his failed business deals, the Federal Election Campaign Act and the FEC's Regulations nonetheless apply to him and his campaign," Right to Rise attorneys Charles Spies and James Tyrrell III wrote. "Perhaps the attached complaint, filed today, will serve as a reminder of your client's legal obligations under federal election laws."

The complaint was first reported by Politico. It was filed in response to Trump's threat Friday to sue Right to Rise and top Bush donor and Miami billionaire Mike Fernandez if they defamed Trump in any advertising. Fernandez bought newspaper ads comparing Trump to bloody dictators and dismissed the lawsuit threat from the Republican front-runner, whom he called "unstable."

But Right to Rise, a leadership PAC separate from the pro-Bush super PAC Right to Rise USA, hasn't produced ads, and said it doesn't intend to -- which means Trump sued the wrong organization, as the Miami Herald noted Monday.

In addition to notifying Trump about the FEC complaint, the Right to Rise attorneys' letter served as a political document. The men took a series of snarky jabs at Trump and reminded Garten that the First Amendment allows expansive speech about public figures.

"If your client is so thin-skinned that he cannot handle his critics' presentation of his own public statements, policies and record to the voting public, and if such communications hurt his feelings, he is welcome to purchase airtime to defend his record," they wrote. "After all, a wall can be built around many things, but not around the First Amendment."

The Trump campaign did not immediately respond to a request for comment.

Read the letter and complaint here