« Are only a few countries out of the anti-Isis coalition providing forces as Marco Rubio says? | Main | 'Gun safety' proposal includes harsher penalties for permit violations » 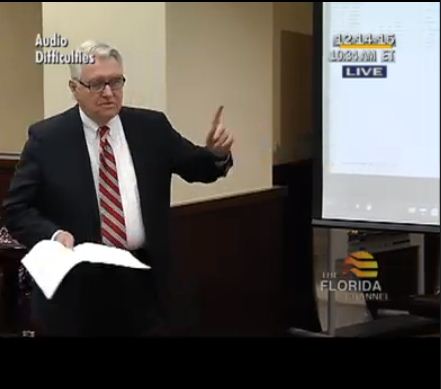 The Senate redistricting trial began Monday with an admission of guilt by the Senate about past wrongs, and a rare agreement between the sides.

Lawyers for the House and Senate and the challengers, a coalition led by the League of Women Voters and Common Cause of Florida, agreed that two maps submitted in the 2012 redistricting fight as public maps were actually drawn by Republican political operatives.

Both sides agreed that Gainesville political consultant Alex Patton submitted a map on Nov. 1, 2011, as part of the public submission process, but “Mr. Patton didn’t draw that map and in fact it was drawn by the political operatives,’’ said Tom Zehnder, lawyer for the challengers.

They also agreed a map submitted by Republican political activist Remzey Samarrai of Micanopy was drawn by the group of Republicans working with Pat Bainter and others. (Our story on that here.)

The admission by lawyers for the Florida Legislature helped to catapult the weeklong trial from a focus on past wrongs to a focus on current issues as they attempt to cover legal arguments, political intrigue and the gritty detail about geographic boundaries throughout the state.

The Legislature agreed in July that because of evidence that showed the GOP operatives had infiltrated the 2012 map drawing process, the map violated the anti-gerrymandering provisions of the Florida Constitution.

The Legislature then tried and failed to draw a new map in special session but, after failing to get enoguh votes for a final proposal that would have created political winners and losers, the burden now rests with the court. Leon County Circuit Court Judge George Reynolds must decide between a map that was chosen by Senate Reapportionment Committee Chairman Bill Galvano, R-Bradenton, alone but never voted on by the Legislature, or four maps drawn by the challengers.

If the judge determines that all maps are discredited, he has little time to approve of another version for the 2016 elections. Ron Labasky, the general counsel for the Florida Supervisors of Elections, told Reynolds they must have a final map approved by mid-March for them to meet the deadlines for the legislative primary in August.

Because of their admission of error, the Legislature now carriers the burden of proof to justify its map meets the constitutional standards. But, rather than defend the map the Senate submitted, House and Senate attorneys have focused their strategy on defending their process and attacking the maps drawn by the challengers as drawn to favor Democrats.

“This is the story of two different processes,’’ said Raoul Cantero, a former Florida Supreme Court justice and attorney for the Senate in his opening arguments Monday. He argued that while the Legislature established a procedure “free of any political taint” that sequestered staff map drawers in “the tower of the Legislature” to draw the maps, the plaintiffs drew maps with the intent to favor Democrats.

Cantero said the staff was instructed to record all conversations while drawing maps and to not to talk to any senators, political consultants or the public – with the exception of discussions with the lawyers.

By contrast, he argued, the plaintiffs waited to submit their map until the House and Senate’s map were on the table.

“It’s easy to wait to draw a map to see somebody else’s map,’’ he said. “It’s a game of leapfrog..They didn’t have a process. They will admit they had a map drawer who drew maps in his apartment with no supervision.”

He argued that the court's role is to find a map that doesn't violate the constitution, not to find the best map.

That argument was countered by David King, attorney for the plaintiffs. In his opening arguments, he focused on the fact that the Florida Supreme Court has repeatedly said that the Legislature has to burden to prove its map follow the Fair Districts standards of the constitution, not the plaintiffs.

He said the court’s recent ruling on the congressional redistricting decision is a “roadmap” for the trial court and noted that the Legislature’s lawyers have no plans to call on Galvano to defend the map he chose to submit to the court.

“Nobody wants to be close to this map,’’ King said. He added, however, that the challengers will call on Galvano, who is hoping to become Senate president in 2018 and who singlehandedly chose the map submitted to the court.

“It was the one that performed best for Republicians -- both from a standpoint of political performance and from the standpoint of protecting incumbents,'' King told the court. "We’ll establish this is simply business as usual in the Legislature."

He urged the court to choose one of their four proposals as "the best constitutionally compliant map.”

King said he was confident the court would approve the process the plaintiff's map drawer. John O'Neill, used and noted that even the map chosen by the House as a compromise to the Senate map included at least eight districts the House took from O'Neill's proposal.

Reynolds asked "what if the alternative map were to become the map? Is it subject to no scrutiny?"

King answered that it is subject to a review of how the map was drawn, and added, "I think you will be very comfortable with the maps that we have drawn because the maps, on their face, show what they have accomplished."

During a recess, King said that the prospect of Reynolds drawing a new alternative was “not a very likely scenario” because the court will find that the alternative maps submitted by the challengers best meet the Fair Districts guidelines.

Meanwhile, as the clock ticks, Labasky was granted a motion to have the supervisors join the lawsuit to advise the court about what they will need to match the new districts to political precincts.

Photo: David King, attorney for the voters' coalition, shows the court charts that he says show lawmakers picked the staff-drawn map that would elect the most Republicans.