Senate rests its case in redistricting trial, presenting one witness -- who gets roughed up 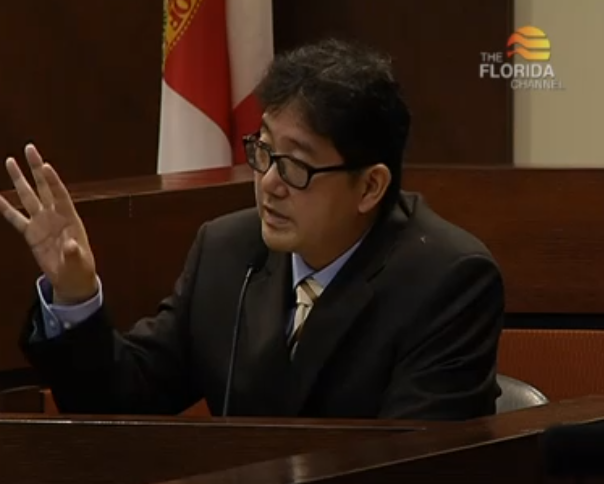 The second day of the Florida redistricting trial ended early Tuesday as the Florida Senate presented a single witness in defense of its redistricting map who withstood a blistering cross examination before the Senate rested its case.

The Senate sole witness was Baodong (Paul) Liu, a professor of political science at the University of Utah, who testified that the Senate's maps were superior because they were more likely to guarantee that minorities could be elected to office.

But in a two-hour cross examination, the lead lawyer for the challengers, David King, attempted to poke holes in Liu's testimony, showing that he failed to include in his report the "functional analysis" that the Florida Supreme Court has ruled is necessary to determine the voting performance of minority districts.
King prompted Liu to  concede that he relied on voting patterns in Central Florida to determine the performance patterns of voters in Broward County, and he provoked Liu to acknowledge that he got the results of one election wrong in his report to the court -- claiming that a black candidate for Orange County clerk of court had been defeated when she had won.
Liu said he relied on "local people" to provide him with "accurate information" about the results and did not verify it independently.
After Liu's testimony, Senate lawyers withdrew a second witness, prompting lawyers to suggest that the weeklong trial could end earlier than the scheduled Friday adjournment.
The focus of Liu's testimony was his review of the state's voting trends, concluding that because of Florida's history of racially polarized voting, the Senate maps proposed by the challengers would likely lead to whites being elected in districts intended for blacks and Hispanics, in violation of the federal Voting Rights Act and the Fair Districts amendments to the state constitution.
He concluded that to increase minority voting participation in Florida, districts must be drawn to give the minority the majority of the population. That means that for blacks to be elected in a Senate district, the voting age population must exceed 50 percent, and for Hispanics to be elected, the voting age population must exceed 75 percent.
"My conclusion is the state Senate plan is a better plan than the alternative plan,'' based on scientific methods used to study "racially polarized voting in the state," Liu told the court.

But King challenged him to point to an election that proved these conclusions were accurate. Liu could not cite an example but said that was no reason to conclude it wouldn't happen.

"One election outcome doesn't mean the pattern changed,'' he said.

But Circuit Court Judge George Reynolds noted the inconsistency of the argument, asking Liu to show how many districts in the Senate map meet his suggested voting age population thresholds, and how many in the map drawn by challengers.

Liu replied that while the map drawn in 2002 had three Hispanic districts in which the voting age population exceeds 75 percent.. He said the Senate map includes only two districts with Hispanic voting age population at that level and the plaintiffs maps include two proposals with one district with VAP at 75 percent or higher, and two proposals with two district with 75 percent or more VAP.

The Fair Districts amendments to the state constitution require that any redistricting map preserves the right for minorities in Florida to elect a candidate of their choice. The Senate argues that the four maps proposed by the challengers diminish the voting strength of blacks in Broward County and Hispanics in Miami-Dade County.

But plaintiffs counter that claim, saying the measurement is not how many people are included in a district but how well the district performs to elect minority candidates. They claim that the Legislature's map attempts to pack blacks into districts throughout the state to help Republicans win in adjoining districts, while the plaintiff's map maximizes the number of districts blacks can safely be elected to the Senate without packing them together.

After Liu's testimony, the trial continued at an unexpectedly swift pace as lawyers for the Senate decided not to present the testimony of one of its two expert witnesses, prompting the judge to suggest that portions of two depositions be read into the record Tuesday afternoon.

The decision led to an odd hour where a lawyer from the plaintiffs' law firm read excerpts of the deposition of Sen. Tom Lee, R-Brandon, and Sen. Jack Latvala, R-Clearwater, into the record.

On Wednesday, Senate Reapportionment Committee Chairman Bill Galvano, R-Bradenton, will be called to testify by the challengers, along with three of their expert witnesses. They claim that Galvano single-handedly selected the Senate map and chose one that gives an advantage to Republicans over Democrats -- in an effort to preserve his chances to be elected Senate presidentin 2018.
The case is expected to finish up on Thursday and the parties will submit their draft motions to the judge on Dec. 23.
Photo: Baodong Liu testifies at Senate redistricting hearing on Tuesday