Was the timing of the congressional redistricting ruling intended to influence the Senate trial? 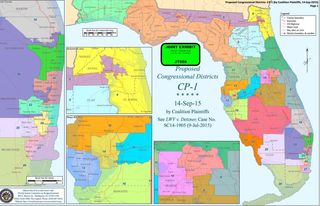 The Florida Supreme Court released its lengthy ruling validating the congressional redistricting map drawn by plaintiffs and approved by the trial court Wednesday, a day before the court routinely releases its opinions. So was the out-of-calendar release of the redistricting opinion  just convenience, or was it intended to send a message to the lawyers, and court, in the pending Senate redistricting trial?

The timing is important.

Friday is the day responses are due in the Senate redistricting case in which parties must specify their objections to the maps submitted. A pivotal issue in that case is the question of who shoulders the burden of proof to show whether the maps as submitted are drawn with partisan intent and the court's ruling addressed that issue at length.  Download Sc14-1905_Final_Opinion (1)

Meanwhile, depositions are underway. As the court released its opinion validating the lower court’s conclusion that the plaintiff's congressional map was not drawn with any attempt to favor or disfavor a political party, the principal mapdrawer for the challengers, John O'Neill, was being deposed in the Senate case.

O’Neill, a consultant with Strategic Telemetry, will be a key witness for the Senate as they try to show that the maps submitted by the plaintiffs – the League of Women Voters, Common Cause and a group of Democrat-leaning individuals – were drawn to favor Democrats in violation of the anti-gerrymandering Fair Districts rules of the state constitution.

The lawyers for the GOP-led House and Senate say that the four maps submitted drawn by O'Neill with consultation with another redistricting expert and they have ties to Democrats. They allege that the maps were designed to intentionally pack Republicans into districts in an effort to make adjacent Democratic seats more competitive for Democrats -- an allegation that has long been lodged against the GOP-drawn maps of the last 23 years.

The Legislature's lawyers argue that the plaintiffs should be held to the same burden of proof as the Legislature in the trial before Leon County Circuit Court Judge George Reynolds.

"It just cannot be the law that if you don't adopt our map, then you can adopt a map that was drawn with improper intent," said Raoul Cantero, a lawyer for the Senate at a hearing before Reynolds on Tuesday. "That's certainly not the intent of the voters when they passed the constitutional amendments."

The 30-minute scheduling hearing was held to prepare for the five-day trial that begins Dec. 14, and the Legislature’s lawyers used it to show that the judge in the Senate case may take a different approach than Circuit Court Judge Terry Lewis, the judge in the congressional case.

On Tuesday, Reynolds said he believes the plaintiffs "should be held to virtually the same standard out of fairness.''

Florida legislators seem resigned to the fact that the Supreme Court has made up its mind with regard to their maps but they are not happy about it.

For example, he said, “when the plaintiffs were requested to participate in the process they waited until the committee process was over and the night before they produced maps.” He also said the plaintiffs submitted maps “that would contradict some of their additional findings” and others that introduced election data they hadn’t previously used.

“They gamed the system in order to try to disrupt and prevent a solution and at that they succeeded,’’ Oliva told the Herald/Times. “Then they have the full cover of the court – which has basically said the plaintiffs can act with impunity.”

Senate Reapportionment Committee Chairman Bill Galvano, R-Bradenton, said “it’s not a mystery where the Supreme Court has been throughout this litigation.”

“When the trial court ruled in favor of the Legislature, the Supreme Court overturned it,” he told reporters Wednesday.

But Galvano, who will be deposed this week by the plaintiffs in the Senate case, is holding out hope that Reynolds could shift the argument.

“Judge Reynolds is taking a different approach than Judge Lewis,’’ Galvano told reporters. “He is interested in the intent of all maps. You’re talking about a constitutional provision that should apply beyond the Legislature. We are in the unique circumstance in the congressional case, and unfortunately in the Senate case, where you don’t actually have a Legislative map, then you comply that tier one standard any map they consider.”

In its lengthy ruling, the majority of the court made it clear that they believe the plaintiffs’ mapdrawers should be rigorously questioned and their maps held to the same Fair Districts guidelines.

"Although the maps themselves were not on trial, their drafters were called to testify during the relinquishment hearing and were subject to cross-examination,'' the court said.

But the court also emphasized it is the Legislature that shoulders the burden of defending its maps and the intent of the mapdrawer is not the issue.

“In reaching our conclusion, we used the trial court’s detailed findings as to how the operatives concealed their actions by using proxies to submit their proposals, wrote scripts for others to state, and made a mockery of the Legislature’s proclaimed transparent and open process, and that they ‘[found] other avenues, other ways to infiltrate and influence the Legislature, to obtain the necessary cooperation and collaboration to ensure that their plan was realized, at least in part,’” Justice Barbara Pariente wrote for the majority.

“Thus, the Legislature is trying to conflate several arguments. The reason that improper partisan intent was found in the drawing of the map was not because of the intent of a particular map drawer or partisan operative. And assuming in this case that the Legislature wants to ascribe an improper intent to the Challengers’ redistricting plan, we would point out that the very record here belies that motive, especially as to the Coalition Plaintiffs.”

The court noted as “an excellent example” that the final map puts U.S. Rep. Ted Deutch into the same district as U.S. Rep. Lois Frankel, both Democrats. And while the lawyers representing the Democrat Romo plaintiffs in the case opposed that configuration, the lawyers for the League of Women Voters and Common Cause submitted it anyway.

The court also dismissed complaints by the Legislature’s leaders that the challengers “gamed” the process by submitting maps on the eve of the House and Senate votes.

“We agree with the trial court that there was no violation of fundamental fairness by the alternative plans not being submitted during the special session. It was logical that the Challengers awaited the release of the Base Plan to ascertain what changes the Legislature contemplated,’’ the majority wrote.

In a conference call with reporters on Wednesday, the lead attorney for the challengers, David King, noted the court’s upholding their maps and validating the mapdrawer and his map will help clarify that argument before the court.

“It will very much streamline the Senate case,’’ he said.