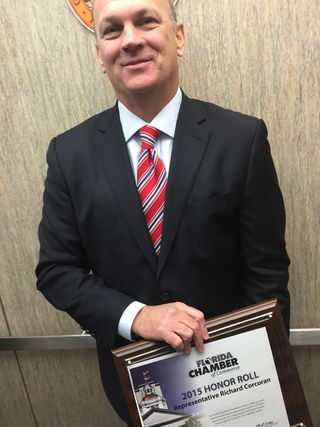 Incoming House Speaker Richard Corcoran didn't tell the Florida Chamber exactly what he thought of them Wednesday, but he came close when he suggested that many of them were complicit in the self-interested politics and artificial barriers to free-market competition that has led to voter distrust and the emergence of Donald Trump.

"Who is the cause? Who are the problem?,'' he asked, at a meeting of the top officials of the Florida Chamber in the state Capitol. "It is us. We are absolutely the enemy and the reason we are the enemy, the reason Donald Trump is on the rise, is because we campaign one way and we govern another."

He said that while Republican legislators often campaign as advocates of the free market, but once they are elected "and then come up to Tallahassee and all too often we don't."

He chastised legislators who shift careers, often promoted to high-paying jobs in the middle of their term, and go to work for a company that "gets money directly from the budget -- that's got to stop,'' said Corcoran, R-Land O'Lakes.

Corcoran aimed his criticism on business executives, who provide the juice and command the profit protections from lawmakers.

"As much we are first and foremost the enemies, you guys are too,'' he said. "Look over the last 40 years and ask yourself, what has government done? Has it been liberals and socialists and communists and unions who have fought for polices that have rigid statutes to protect your profits, eliminate risk and guarantee contracts? No. It's our business community that has done that. I get that you are pro-business but, what matters, is being pro free-market. If we're pro free-market, everyone will do well. But when you're championing for those things that protect you, the result is horrible."

Corcoran, who supports former Gov. Jeb Bush in the Republican presidential primary, blames the hypocrisy on discouraging voters and elevating Trump, whom Corcoran said is  "grossly ignorant to the issues to make our country great."

"What birthed the phenomenon of a candidate who in all definition of the word is running a quasi-repugnant campaign that is baseless? You have a candidate who has flip-flopped on every issue,'' he said.

"I ask people why are you supporting Donald Trump? You tell me whatever issue it is and I'll send you an issue of Donald Trump on the complete other side of that issue. You have a guy who has offended every other possible group known to mankind. He's insulted and offended women, Mexicans, Jewish people, disabled people, people in Middle America. I don't know who he hasn't offended and somehow that's okay?"

Corcoran said Trump has "shown a lack of knowledge" about treaties, the Nuclear Triad, and other important issues "and yet this is getting to get the pulse?"

If the chamber leadership took any offense, they didn't show it. After his remarks, David Hart, the Florida Chamber's vice president, gave Corcoran its Honor Roll award for five years of voting 100 percent with the chamber's agenda.