« Wasserman Schultz deflects criticism of her handling of DNC: 'I have the skin of an alligator' | Main | Florida's next insurance commissioner could make as much as $200,000 » 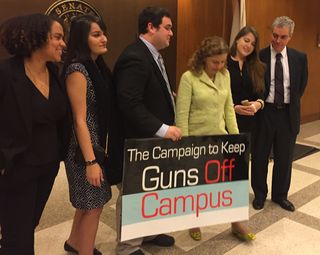 The Senate chairman of the Senate Judiciary Committee confirmed Thursday that the controversial bill, SB 68, to allow guns on college campuses will not get a hearing in the Senate, even though it is moving swiftly through the Florida House, effectively killed the measure for the session.

"I don't think this is a Second Amendment issue,'' said Sen. Miguel Diaz de la Portilla, R-Miami, whose committee hear all the gun bills. "I think what we're talking about here is campus safety and the best way to address that issue and whether the proposed cure is worse than the disease."

Diaz de la Portilla also refused to hear the campus carry bill last session. He said, however, that he will hear a separate gun bill, SB 300, that would allow concealed-carry license holders to openly display their guns in public and private spaces.

The announcement came on the same day of Congresswoman Debbie Wasserman Schultz, D-Fort Lauderdale, added her voice  to the Democrat's opposition to the array of pro-guns bills moving through the Florida Legislature.

Wasserman Schultz, who served in the Florida Legislature for 12 years, said that she's not only a constituent of the Legislature from Broward County but a mother.

"I'm here to sound the alarm to make sure that they wake up and understand that they should be listening to people,'' she said. As a mother of twins who are juniors in high school, she said, "it's really troubling and disturbing to me to think they could be on a college campus where another student may decide to solve a problem with a gun."