« Bondi's office: Florida's next scheduled execution should not be stayed | Main | High stakes for 7 candidates in GOP debate » 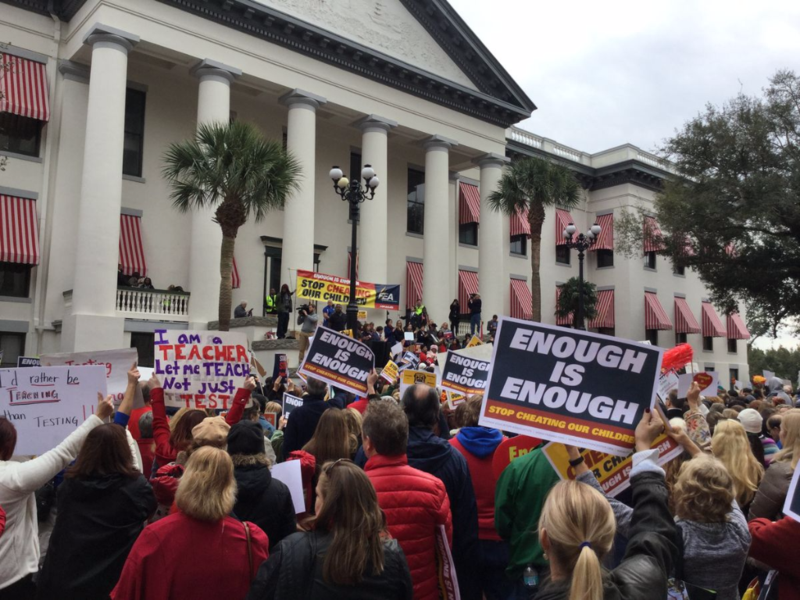 More than 2,000 educators across Florida rallied at the state Capitol on Thursday to protest high-stakes testing, for-profit charter schools and other statewide education policies they feel are harming students and de-valuing classroom teachers.

With repeated chants of "enough is enough," the crowd filled much of the plaza between the old and new Florida capitols to let lawmakers in the rooms above know of their discontent.

"The biggest thing I want: I want politicians out of the classroom," said Joanne McCall, president of the Florida Education Association -- the state's largest teachers union, which organized the rally. "We want them to listen -- really listen -- to what we have to say."

McCall lambasted the Republican-led Legislature for "the practice of blaming and shaming teachers" and called for an overhaul of the state's education accountability system, where students' performance on the new Florida Standards Assessments is used to decide school grades and evaluate teachers.

"Teachers are not opposed to testing. Heck, we invented it," McCall said. "But Florida's obsession with testing is cheating our children out of crucial teaching and learning time, and they will never, ever get that back."

She also called on lawmakers to enact accountability standards for voucher programs and for-profit charter schools, so they can be evaluated equally with traditional public schools. 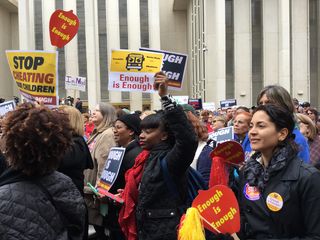 Teachers and classroom professionals came from all over Florida, including a reported contingent of about a dozen buses with about 600 teachers from Miami-Dade County. Those teachers drove all night to get to Tallahassee, they said.

"We're here because we want to be treated fairly, and we want the kids to be treated fairly," said Sonji Allen, a teacher at Carrie P. Meek/Westview K-8 Center in Miami. "(The system) is broken because it's focused on one thing: a single test. ... You want them to be a data point. They're way more than that. Don't insult their intelligence."

Throughout the crowd, educators held up signs declaring "show us some respect," "stop toxic testing" and "silent no longer." There was even a "wanted" poster for Republican Gov. Rick Scott.

Other educators in attendance wanted an end to the controversial "Best and Brightest" teacher bonus program, better wages for teachers and classroom professionals and more freedom for teachers, who feel they are too often teaching to a test.

"Our kids are not learning the way they should be learning," said Rachel Miller, a teacher from Lecanto Middle School in Citrus County. "We need to let these legislators know that our kids are important, and they are what matters, and they are the future."

No lawmakers spoke during the rally, but a couple were spotted in attendance, including teacher and Sen. Dwight Bullard, D-Cutler Bay.