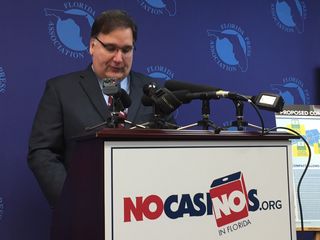 The proposed gambling agreement between the Seminole Tribe and Gov. Rick Scott is a "bad deal for Florida" because it will expand gambling across the state, violate the Florida Constitution, and undermine the state's economy, said John Sowinski, president of NoCasinos.

As a result, the an Orlando-based advocacy group will lobby against any effort by lawmakers to ratify the $3 billion, seven-year deal between the governor and the tribe, will argue before the Florida Supreme Court that "recent murky case law" and a shift in legislative thinking has led to a new interpretation of the state's prohibition on legalized forms of gambling and will ask the court to clarify that any change in gambling law must be approved by voters statewide.

And, if the Florida Supreme Court rejects their argument in the pending case known as Gretna Racing v. the Department of Business and Professional Regulation, the group has launched a petition drive to put an amendment on the 2018 ballot that seeks to clarify that all gambling activity must be authorized in the Florida Constitution, and approve by voters in a statewide referendum.

"Casino gambling is the wrong economic and the wrong social policy for Florida,'' Sowinski said. ""It’s been a disaster and failed to fulfill promises in virtually every jurisdiction where it’s been legalized. And it’s become a burden our our legislative and political processes."

The crux of the group's argument is that Article X, Section VII, of the state constitution, which states: "Lotteries,other than the types of pari-mutuel pools authorized by law as of the effective date of this Constitution, are hereby prohibited in this state," prohibits the Legislature from approving any new form of gambling without voter approval.  Download Article X section 7

Sowinski argues that the Legislature's approval of Black Jack and other table games at the Seminoles' casinos in 2010 was an unconstitutional expansion and the proposed compact, to allow non-tribal slot machines at the Palm Beach Kennel Club, also violates the constitution. He said they opposed legislation to allow people to use gas pumps to purchase lottery tickets and efforts to regulate daily Fantasy Sports as games of skill. 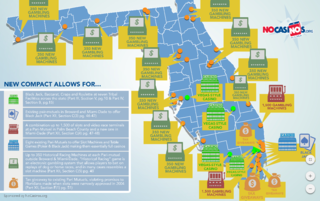 "More gambling in Florida would not add to our economy, it would prey on it,'' he said, demonstrating a graphic that shows the potential expansion under the gaming deal Scott signed. He also noted that a report by Spectrum Gaming commissioned by the Florida Legislature found that 95 percent of the patrons of new destination resorts casinos in Florida would residents, not tourists.

"That means that gambling is not economic development, it would be an economic parasite for our state,'' he said. "Money spent on a casino is money not spent on a restaurant, a movie theatre or a bar, or some other form of entertainment."

A pending case before the Florida Supreme Court challenges the state's ability to limit gaming based on the lottery prohibition and Sowinski said the group will file an amicus brief in that case by Feb. 21.

NoCasinos, which will not disclose its members, has in the past as been supported by Disney, the state associations for the attractions industry, the restaurant industry and the hotel industry.