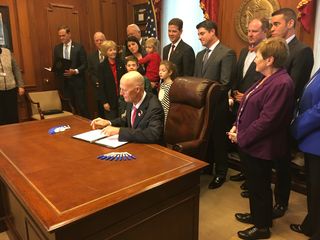 Surrounded by members of the House and Senate -- and President Andy Gardiner's entire family -- Gov. Rick Scott on Thursday signed the first three new laws of 2016.

Together, the legislation represents a joint agenda set out by Gardiner, R-Orlando and House Speaker Steve Crisafulli, R-Merritt Island, after they took office in 2014: a comprehensive re-write of state water policy and an expansion of resources available to help people with special needs get an education and career training.

"It's a great start to session," Scott said. "I know we're going to have a great finish to session, and I'm sure we'll have a lot of fun along the way."

That made the assembled lawmakers laugh. Both Crisafulli's water bill and the Gardiner Scholarship -- which senators named the expansion of Personal Learning Scholarship Accounts for children with special needs -- failed to pass last session, held hostage in the budget blowup.

Lawmakers passed them last week as a sign of good faith for cooperation this session.

That doesn't mean there aren't detractors, however. While some environmental groups endorsed the new water policy, others have been outspoken against it. This week, former Gov. Bob Graham wrote a letter opposing the legislation on behalf of the Florida Conservation Coalition.

"This 134-page bill represents a purposeful effort to weaken protection and management of Florida’s water resources," he wrote. "It will result in further corrosion of what was once hailed as the water management standard of the Nation."

Agriculture Commissioner Adam Putnam gave lawmakers and the governor a nod of support.

"In order to accommodate our explosive growth and ensure that our state, residents and visitors thrive, we need this long-term, science-based and comprehensive approach to water policy," he said in a statement. "This legislation will help provide the resources to meet the needs of our growing population, while protecting our environment."

The Gardiner Scholarships legislation includes what Sen. Jeff Clemens, D-Lake Worth, called a "giveaway to the school uniform industry": $14 million in incentives for school districts and charter schools that require students to wear uniforms.

But Gardiner, Crisafulli and Scott hailed the day as significant. It's especially so for Gardiner, whose son Andrew has Down syndrome and who has focused on the issue for years.

"To see the Gardiner Scholarship now officially done, that's very special for us," Gardiner said. "But it's also important for the families around the state."