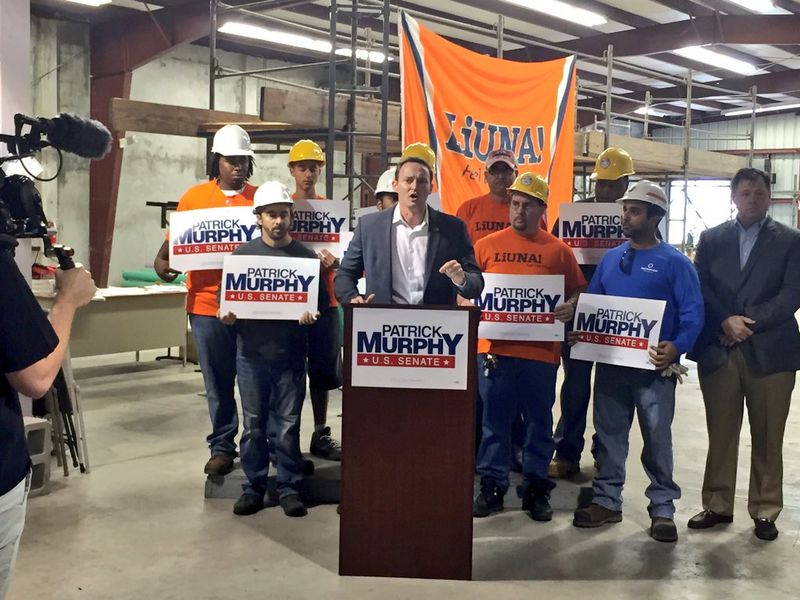 U.S. Rep. Patrick Murphy, D-Jupiter, picked up another high-profile endorsement on Friday in his bid to be the Democratic Party's candidate in Florida's U.S. Senate race to replace Marco Rubio.

The Laborers' International Union of North America (LIUNA) announced its support for Murphy during a campaign event in Pompano Beach.

"He supports our working families and we believe that his commonsense approach to leadership is exactly what Florida needs right now," Glenn Farner, business manager of LIUNA’s Southeast Laborers' District Council, said in a statement provided by the campaign. "Time and again, Patrick has proven that he will fight to protect our workers’ rights, fight for their hard-earned, high-quality union health benefits, and fight to raise the minimum wage.”

Murphy has continued to rack up endorsements from the party establishment and key interest groups in the competitive primary against fellow U.S. Rep. Alan Grayson, of Orlando.

National experts say the outcome of Florida's race could determine which party controls the U.S. Senate a year from now.

The Republican Party of Florida had this to say on Murphy's latest announcement:

“While Patrick Murphy attempts to hide the rapidly growing support behind Alan Grayson with the endorsements of a job-killing union, the truth remains that he is more focused on advancing his personal political ambitions than the best interest of Florida families," RPOF spokesman Wadi Gaitan said in a statement.

It's an example of one of the party's efforts to drive a greater wedge between Grayson and Murphy and add fuel to their rivalry.