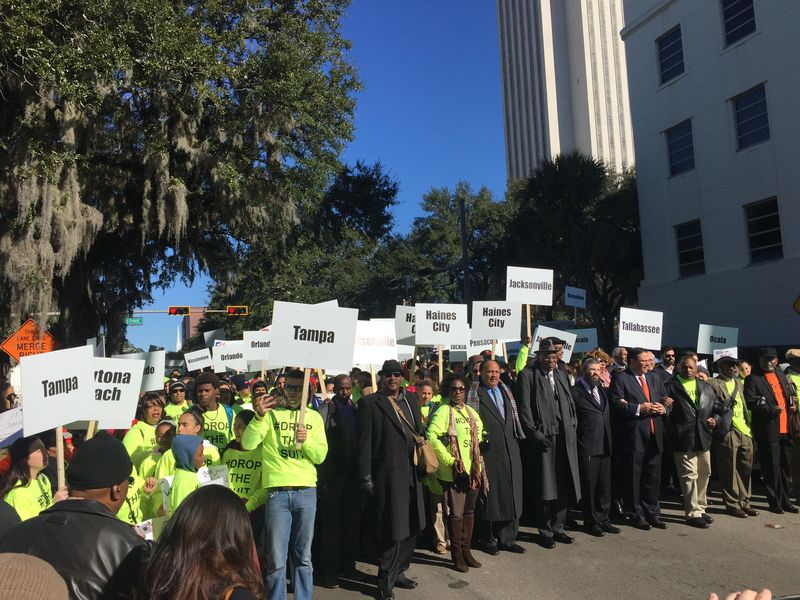 Martin Luther King III joined several religious and community leaders in praising the Florida Tax Credit Scholarship, which they say affords opportunities many families wouldn’t otherwise have, and they urged the Florida Education Association to end its “misguided” effort to halt the program.

Critics — led by the FEA — argue the tax-credit scholarships divert state money away from a quality public education system the state is required, under the Constitution, to provide.

The 15-year-old state program helps low-income families afford to send their children to private schools by giving dollar-for-dollar tax credits — as much as $447 million this year, growing to $560 million in 2016-17 — to businesses that donate to organizations that fund the scholarships. Almost all of the scholarship money is facilitated by Jacksonville-based Step Up For Students.

“This is about justice; this is about righteousness,” said King, eldest son of the late civil rights leader whose namesake annual federal holiday was Monday. “This is about freedom — the freedom to choose for your family and your child.”

Organizers for the rally — which included the “Save Our Scholarships Coalition” and various other school-choice advocacy groups — called the "historic" event the largest school choice rally ever in Florida and one of the largest in the country. They said 10,500 people attended, with 240 busloads coming from all over the state — including three dozen buses from South Florida and about 30 from the Tampa Bay area.

Some of the buses appeared less than full as they arrived downtown. The throng of people — mostly school-age children — marched from the Tallahassee Civic Center and then crowded Duval Street between the Florida Capitol and the Florida Supreme Court building.

Catherine Durkin Robinson, executive director of Tampa-based Florida Voices for Choices, said in a video promoting Tuesday’s rally that participants would receive free bus transportation to Tallahassee, meals, rally t-shirts and poster materials. The video was paid for by the American Federation for Children, which supports alternative options to traditional public schools and also paid for the Tallahassee rally.

The Washington, D.C.-based group spent $1 million to put on the event, a spokeswoman said.

“Given all this choice that Florida is providing, why in the world would the union challenge the program that helps disadvantaged families?” said Bishop Victor Curry of Miami’s New Birth Baptist Church. “Maybe they think we will not stand up to them or stand up for our children. But as you can see, they are dead wrong.”

The FEA said it’s not giving up on its lawsuit.

“For more than a year, voucher groups have been demanding FEA drop a lawsuit challenging the constitutionality of the tax-credit vouchers. What are they so afraid of, going to the courts to ensure this voucher scheme is legal?” FEA President Joanne McCall said in a statement. “Let’s let the courts decide this once and for all.”

“Florida’s students and taxpayers would be better served by investing our scarce resources to improve our lowest-performing schools and making them our priority schools so that we can help all of our students,” she added.

The FEA led a protest of about 2,000 teachers last week at the Capitol in support of traditional public schools and criticizing voucher programs and for-profit charter schools, among other grievances.

About 78,100 children — predominantly minorities — received tax-credit scholarships for the 2015-16 school year, according to the Florida Department of Education.

The largest share is from Miami-Dade County, whose 20,800 recipients account for more than a quarter of the program. Among other South Florida counties, Broward has 7,000 student participants, Palm Beach has 2,400 and Monroe has 115.

Student scholarships for 2015-16 were as much as $5,677 toward tuition and fees at one of nearly 1,600 participating private schools statewide, according to DOE, 80 percent of which are religious schools. Almost 40 percent of the students enrolled with tax-credit scholarships this year are Hispanic and another 30 percent are black.