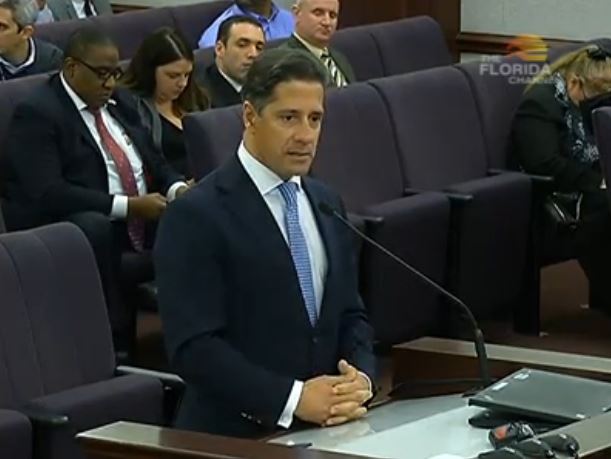 Six Miami-Dade County School Board members and district Superintendent Alberto Carvalho are in Tallahassee today, meeting with local lawmakers and testifying on some bills that had hearings before legislative committees.

Carvalho also met with Republican Gov. Rick Scott this afternoon, which Carvalho said earlier today would be a routine affair that's "just one more opportunity to re-state our priorities."

He said those include equity in funding (including capital dollars), the state's education accountability system and an emphasis on students learning the English language, among other topics.

Funding for school districts' capital dollars has been a controversial and prominent topic recently. Lawmakers in both chambers are set to begin negotiations this week on the next state budget, where they'll compromise on how much in capital dollars school districts and privately managed charter schools should get. This comes as lawmakers are considering a proposal spearheaded by Miami Republican Rep. Erik Fresen that would require school districts to give to charter schools some of their state funding for maintenance and repairs.

Carvalho told the Herald/Times that changing the funding formula for school districts and how they use local and state tax dollars "could be rather devastating to the financial stability of our district long-term," and in the short term, he said, it could be "rather impactful or catastrophic in terms of our maintenance needs and everyday construction renovation needs."

He said "it would be an insult to local voters" if lawmakers tried (and some have argued) to consider local initiatives that improve districts' own capital funding -- such as a $1.2 billion bond Miami-Dade voters overwhelmingly approved -- as a substitute for traditional state aid. State capital dollars for districts have declined significantly in recent years as lawmakers diverted money to charter schools.

Miami-Dade is the fourth largest school district in the nation.

Meanwhile, among the hearings Carvalho and school board members testified at today was one on SB 766 -- a measure by Miami Republican Sen. Anitere Flores that would would set limits on local value adjustment boards' consideration of property value petitions. It would also require the boards to certify property values no later than June 1, starting in 2017.

In today's hearing before the Senate Finance and Tax Committee, Flores said in some counties, including Miami Dade, value adjustment boards can take "an excessively long time" and "it means that those entities that are dependent on public dollars have to wait a long time to receive that funding," particularly school boards.

Carvalho said school districts are "short-changed" tens of millions of dollars every year by local value adjustment boards not dealing with cases expeditiously, which he said can create a temporary cash-flow issue for districts.

Flores' bill has cleared its second of three assigned committees by unanimous votes. Its House companion -- HB 499 by Rep. Bryan Avila, R-Hialeah -- is on its way to the House floor, after clearing the House Appropriations Committee this evening.

Carvalho also testified in favor of SB 1314 -- a proposal by Sen. Charlie Dean, R-Inverness, which would create a public records exemption that would preclude the release of "personal identifying information" for people who witness felony crimes. The bill was supposed to be voted on today by the Senate Criminal Justice Committee; the committee heard testimony but then postponed the bill.

Carvalho told the Herald/Times his interest in the legislation stems from "recognizing the toll gun violence has had on our communities," citing the shootings of more than 60 school-age children in Miami-Dade in the past year, 20 of whom were killed.

"Witnesses know far more than what they say," Carvalho said. "We're supporting this bill because we believe -- after listening to mothers of murdered kids and law enforcement -- ... that they tell us witnesses in these communities would actually rise up and speak, if additional protections were provided to them."

He added, "I think this measure would build confidence and protection to witnesses, who could very well help solve these crimes and reduce community violence that particularly plagues our kids."