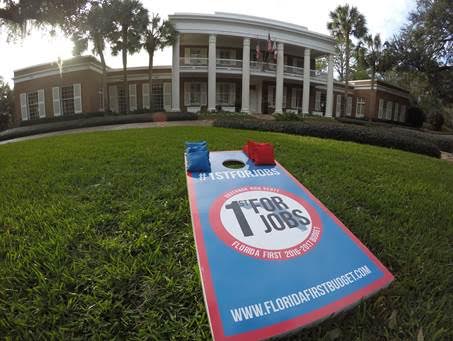 The governor plays cornhole at the Florida Capitol, lawmakers huddle for initial budget talks and controversial gun bills get a floor vote in the House. Here's what we're watching today:

* Proposed plans for the 2016-17 budget will go before the House's and Senate's full appropriations committees. Both chambers have scheduled daylong meetings to debate and revise their respective proposals, which were released Friday. (House Appropriations, 8 a.m., 212 Knott Building. Senate Appropriations, 9 a.m. 412 Knott Buiding)

* Gov. Rick Scott is elevating his efforts to persuade the Legislature to support his call for a $1 billion tax cut and $250 million in business incentives. In a rare move, he's hosting a rally at the Florida Capitol, starting at 11 a.m. It will feature "leaders from around the state" and a specialty cornhole set branded with Scott's slogan of "1st For Jobs."

* The House Finance and Tax Committee, led by Rep. Matt Gaetz, R-Fort Walton Beach, plans to formally unveil its "bipartisan" tax cut package -- and "much anticipated" hashtag -- during a press conference after the committee's meeting, set for 11:30 a.m. to 2:30 p.m.

* More than 100 employees of the Seminole Hard Rock Hotel & Casino in Tampa plan to visit with House and Senate members to help draw support for a $3 billion gaming compact, which the Seminole tribe and the governor signed but which the Legislature is hesitant to back.

* The House convenes for session at 3. After heated debate yesterday evening, the chamber is expected to pass two controversial gun bills and consider a slew of other legislation on the table.