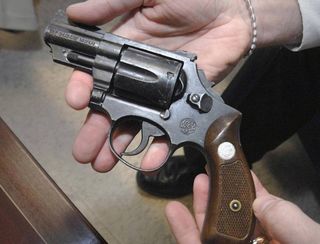 In the one-page ruling, the 11th U.S. Circuit Court of Appeals agreed to grant an en banc hearing to reconsider a 2-1 decision that upheld the controversial law in July.

The hearing means that the full 11-member panel will rehear the case decided by three of its members. The court generally conducts en banc hearings in cases considered matters of exceptional public importance or to resolve conflicts in the law.

The hearing is a victory for medical groups that argued that the law infringed on doctors’ First Amendment rights and is a setback to the National Rifle Association and other gun-rights advocates who pushed for the law.

"Under the Eleventh Circuit Rule 35, the effect of granting rehearing en banc is to vacate the previous opinion and judgment of this court and to stay the mandate,''  the court wrote.  Download 'Docs and Glocks' Order Granting Rehearing En Banc

Dubbed the “Docs vs. Glocks” law and signed by Gov. Rick Scott, it subjects health care providers to possible sanctions, including fines and loss of license, if they discuss or record information in a patient’s chart about firearms safety that a medical board later determined was not “relevant” or was “unnecessarily harassing.” The law, however, did not define these terms.

The law, titled the Firearm Owners’ Privacy Act, was challenged by doctors who argued that the First Amendment right to free speech protects physicians’ inquiries about firearms in patients’ homes.
U.S. District Judge Marcia Cooke, a Jeb Bush appointee, blocked the state  from enforcing the law and imposed the injunction. She concluded the law was so “vague” that it violated doctors’ First Amendment rights and noted the legislation’s privacy provisions “fail to provide any standards for practitioners to follow.”

The Florida Department of Health appealed her summary judgment and it was overturned by the appeals court in July 2014. In July 2015 the court upheld that decision.