Gaetz: Diaz de la Portilla 'stifled will of Senate' on open carry, 'promised and then reneged' on compromise 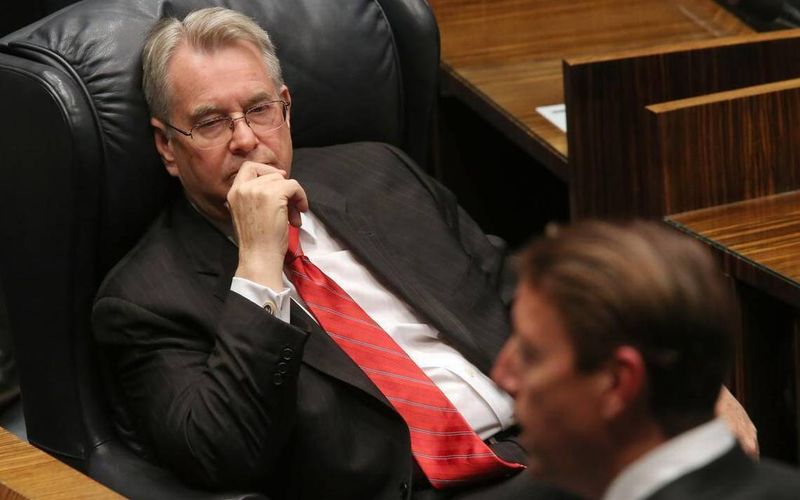 State Sen. Don Gaetz said in a lengthy statement this evening that Miami Republican Sen. Miguel Diaz de la Portilla "stretched" his authority as Judiciary Committee chairman and "stifled the will of the Senate to cast an up or down vote" on Gaetz's proposal to let people openly carry handguns in Florida.

Gaetz, a conservative Republican from Niceville, also accused Diaz de la Portilla of lying about his intentions to find a compromise on the highly controversial measure.

"I’m deeply disappointed," Gaetz said. "It is perfectly proper to vote against a bill. It reflects poorly on any chairman to fear the debate.

"The Judiciary Committee chairman promised and then reneged on a commitment to meet with me and other pro-Second Amendment legislators to try to negotiate differences in good faith," Gaetz added.

The more-moderate Diaz de la Portilla made it official Tuesday that he would not hear Gaetz's bill this session -- killing it as he has two other gun bills this year that sought to expand how and where more than 1.5 million people with concealed-weapons licenses in Florida can carry handguns.

Diaz de la Portilla said this evening that Gaetz was "disingenuous" with his criticism, because Gaetz himself is a committee chairman and former Senate president who understands the prerogative chairmen have.

Gaetz acknowledged that Diaz de la Portilla is "technically within his rights as a chairman not to hear the bill."

Gaetz added: "I have faced the same question as Senator Diaz de la Portilla: Should I kill a bill that a majority of legislators want to debate, and perhaps pass, just because of my own personal preferences? In fact, I have faced that question on matters important to Senator Diaz de la Portilla and his constituents. The difference is I did not stretch my authority to stifle the will of the Senate to cast an up or down vote.

"Put simply, Senator Diaz de la Portilla used his power as a committee chairman to deny senators and the public the opportunity even to discuss the issue of open carry and vote for or against the bill," Gaetz said.

Current Senate President Andy Gardiner, R-Orlando, has supported Diaz de la Portilla's decision, though. Gardiner left it to Diaz de la Portilla to decide whether the open-carry bill and other contentious gun proposals would be heard, and he has been consistent in empowering other committee chairmen with that discretion, also.

Diaz de la Portilla said he and Gaetz "spoke briefly on the floor once" about open carry "and maybe on another occasion before that." He said Gaetz did not address his frustrations with him directly.

Gaetz said he believes his open-carry bill could have passed the full Senate "with the constructive amendments recommended by The Florida Police Chiefs Association."

But that's another point of disagreement between the senators.

The police chiefs' provisions -- which included requiring openly carried weapons to be holstered -- were added to the House version, which was sponsored by Gaetz's son, Rep. Matt Gaetz, R-Fort Walton Beach. (That bill passed the Republican-heavy House earlier this month.)

However, the Florida Sheriffs Association offered amendments of their own, which were rejected in the House and which Don Gaetz said he would have not wanted considered in the Senate.

The sheriffs' proposal would have gutted the bill. It wouldn't have allowed open carry but would have solely addressed a problem that the National Rifle Association said was its motive for seeking an open-carry law: the prosecution of people who inadvertently display concealed weapons.

Diaz de la Portilla said Thursday the sheriffs' proposal was "the only solution or compromise that I felt was workable."

"I did rack my brain trying to find a workable solution on the issue of open carry, but at the end of the day, it’s such lousy public policy and so dangerous for the state of Florida," he said. "You can’t fix something that is such terrible public policy."

Emphasizing Floridians' Second Amendment rights, Gaetz said his bill "would have allowed only those persons lawfully able to carry handguns to do so without concealment, without brandishing them, without violating private property rights and without allowing weapons in any place where they are now prohibited."

Diaz de la Portilla has said previously, though, he worried about "unintended consequences" of the legislation.

"Some things are such bad ideas that there’s no fixing them," he said Thursday. "Unfortunately, that’s the case with Senator Gaetz’s bad bill."