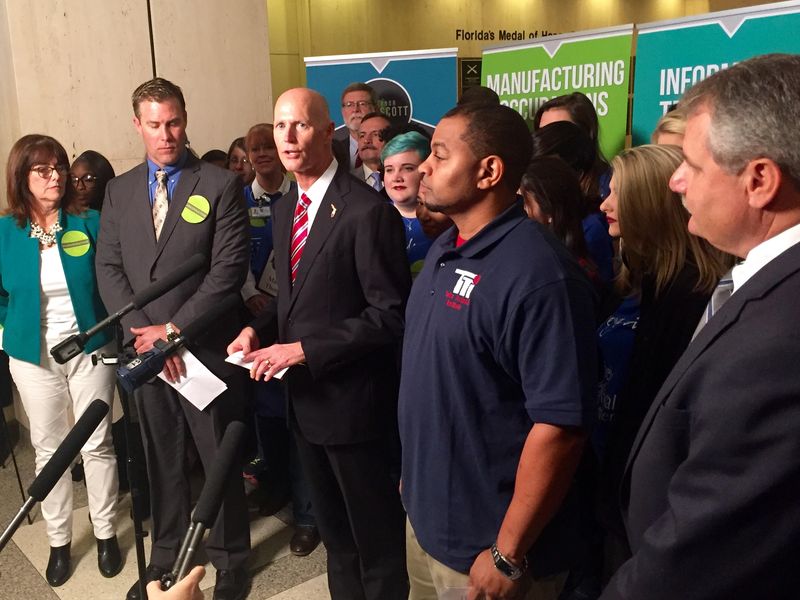 Trying to get Florida lawmakers' support for one of his more lesser-profile priorities, Republican Gov. Rick Scott rallied in the Capitol rotunda this morning to raise awareness for his call to invest $20 million in a grant program that would help students at the state's 48 post-secondary technical centers.

"You have to be here to make sure your legislators know what's important to you," Scott told the crowd, noting his proposed Technical Center Rapid Response Grant Program is "important to people who want jobs around our state."

Scott included the $20 million for the new program in his proposed budget to lawmakers. Education budget leaders in both the House and Senate have said they are open to discussing it but aren't committing to Scott's specific recommendation.

Senate education budget Chairman Don Gaetz, R-Niceville, mentioned the full $20 million in funding when he gave his initial budget presentation in late January, noting that "how that will be defined will be the subject of" future committee work in the Senate.

Both the House and Senate will discuss their full budget proposals on the chamber floors today and Thursday.

It's not common practice for Scott to lobby lawmakers directly or hold rallies to drum up support for his priorities. In the past couple months, though, he's appeared before House and Senate committees to argue for his tax-cut package, and last week, he held another Capitol rally to promote his call for $1 billion in tax cuts and $250 million in business incentives.

The "rapid response" grants are one of at least a handful of priorities that lawmakers either have rejected, questioned or are offering counter proposals for during the 2016 session. Among those topics: the proposed tax cuts, the business incentives for Enterprise Florida, the Seminole gaming compact, and his funding plan to increase to K-12 education funding using mostly local property tax revenue.

In line with his ongoing goal to get Florida students employed, Scott's budget proposal called for the Department of Education to set up the "rapid response" grants to help expand or develop post-secondary programs "in high-demand areas." The state's tech centers served more than 230,000 students in 2014-15.

"I've never met anybody in the state who's interested in going on unemployment. They all want jobs," Scott said. "It's our job to create an environment where they can get the best jobs possible."