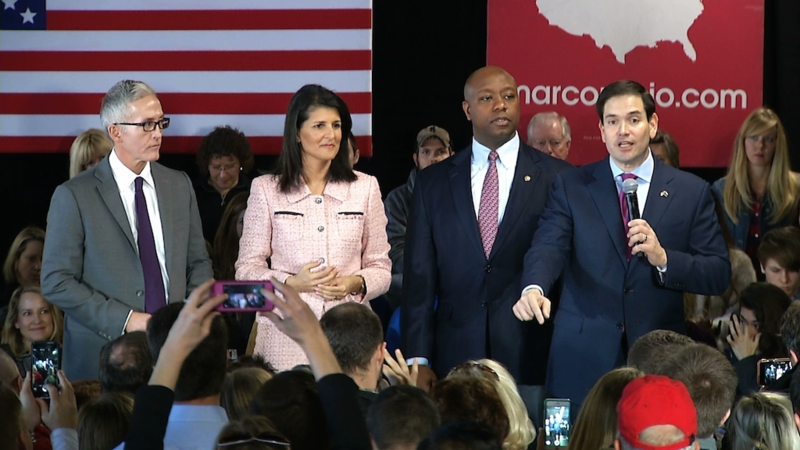 Sure, Marco Rubio still summons fear on the presidential campaign trail, issuing dire warnings about ISIS, the national debt and what he characterizes as the impending death of the American Dream.

But the Rubio of some weeks ago who adopted a grim tone and creased face as he tried to keep up with the gloom and doom of Republican front-runners Donald Trump and, especially, Ted Cruz, is now smiling for selfies with voters who queue for him like a receiving line at a Miami quinceañera.

This is sunny Rubio, his most natural political persona. The one who cracks jokes and pokes fun at himself for repeating them verbatim because they get laughs. The one who keeps a room rapt in silence when he tells his family's rag-to-riches story. The one who made a point Thursday of standing side-by-side with a white congressman (Trey Gowdy) an African-American senator (Tim Scott) and an Indian-American governor (Nikki Haley) to offer a portrait of what the GOP could look like.

“The great thing about our party is we have this great new generation of leaders ready to take the mantle,” the Cuban-American Rubio said at a rally held at Swamp Rabbit CrossFit, a gym in Greenville, the heart of South Carolina’s conservative upstate. “We are prepared to turn the page and move forward.”

“Take a picture of this,” Haley encouraged attendees, who promptly raised their cell-phone cameras. “Because this new group of conservatives taking over America looks like a Benetton commercial.”

South Carolina’s Republican primary electorate does not. Neither do crowds at events for GOP candidates across the state.

But Rubio generally draws more twentysomethings and young families than some of his counterparts, and several people of color attended the Greenville rally of a couple of hundred people.