Jeb Bush fires up Twitter with shot of personalized gun 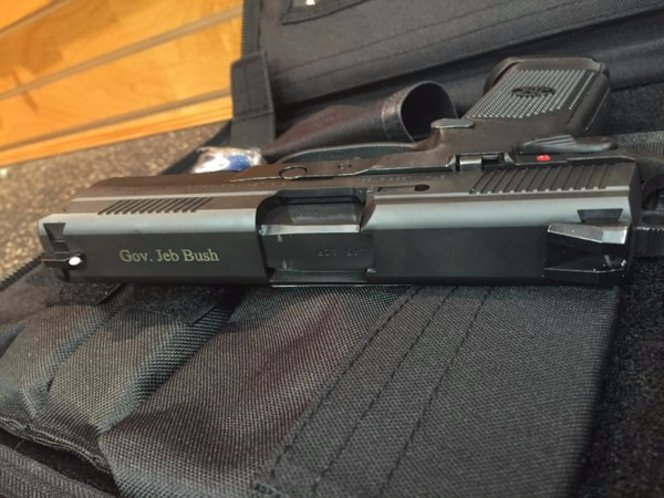 Jeb Bush found a way to stir up Twitter.

By posting a photo of a handgun with the caption, "America."

He had gotten it earlier during a tour of FN Manufacturing, a major firearms maker in Columbia, S.C. But Bush posted the caption without context, leading to the range of emotion you'd expect. By 9 p.m. Tuesday it had been retweeted more than 15,500 times.

And Twitter was ready to respond. Some altered the inscription on the gun. Others named another location — often a fictional location — and the "weapon of choice" from that location.

Here are some examples:

.@JebBush No, this is America. That's a gun, champ. pic.twitter.com/BTDFIp0u3f

Jeb Bush, down 12 strokes going into the final hole, just aimed dead at the ocean and hit a driver thinking it might help him win

If my friend sent me this tweet I'd drop everything and go to him. https://t.co/4yLZImp5Gy

Shame on you, @JebBush.
I thought you were smart when I interviewed you.
I was wrong.
You're a gun-slathering fool. pic.twitter.com/j2ZPYukzIp

The New York Daily News, which has seized the gun issue repeatedly on its front pages, mocked Bush on its Wednesday cover: