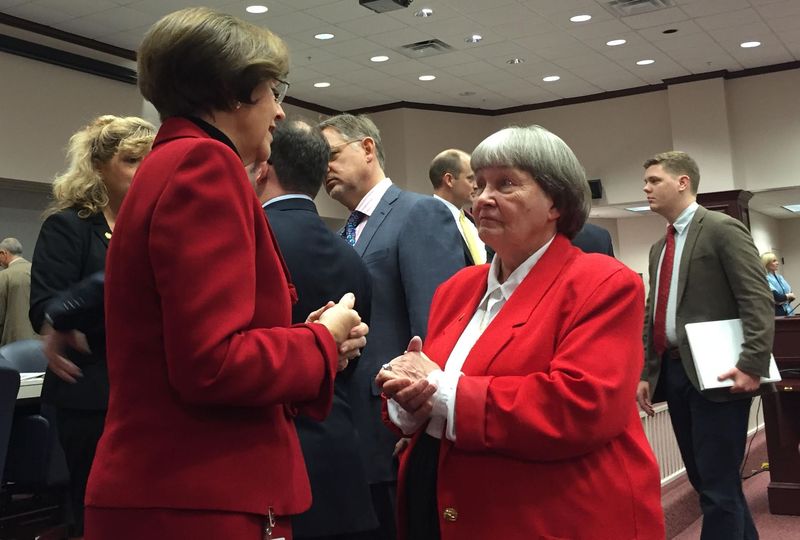 The discourse over gun rights versus gun control will be on full display in the Florida House this afternoon.

The chamber's 120 representatives are set to debate a high-profile and controversial measure that would allow 1.4 million people with concealed weapons permits in Florida openly carry their weapons statewide.

As of late Monday, 44 amendments -- including four that were subsequently withdrawn -- had been filed to HB 163,  a little more than half of them by Democrats seeking to shore up or chip away at what they described last week as flawed legislation.

They're unlikely to be successful in the Republican-majority chamber, and Rep. Matt Gaetz, R-Fort Walton Beach -- the sponsor of the bill who says he wants to "vindicate" Floridians' Second Amendment rights by legalizing open carry -- filed 21 of the proposed changes, many of them substitute amendments that appear to counter the Democratic proposals.

Rep. John Wood, R-Winter Haven, has brought back an amendment he attempted but later withdrew during last week's lengthy and heated hearing before the House Judiciary Committee. It would allow lawmakers to carry concealed in legislative sessions and official meetings.

-- protecting religious organizations' right to restrict or prohibit the carrying of guns on their property;

-- allowing county constitutional officers to restrict or prohibit guns on government property over which they have authority;

-- prohibiting loaded weapons from having ammunition in the chamber or, if it's a revolver, the hammer cocked;

-- temporarily suspending the license of someone who's intoxicated or under the influence while openly carrying;

-- criminalizing the open-carrying of guns with "high-capacity ammunition feeding devices," or a magazine that holds more than 15 rounds of ammo.

Gaetz is rebutting almost all of them with his own amendments.

For instance, on open-carrying near bars, movie theaters, places of worship, polling places or school safety zones, Gaetz proposes to allow the act but require guns be holstered or in a case or bag. The proposed law, as-is, generally requires openly carried handguns to be in holsters or cases/bags, because of an amendment added during the last committee stop.

Among his other counter amendments: Gaetz also proposes banning people from openly carrying if they're intoxicated or under the influence and he would ban illegal immigrants from getting a conceal-carry permit.

A couple changes Gaetz filed, though, seem to be a compromise in reaction to concerns raised by Democrats last week.

For example, one amendment from Gaetz would allow public hospitals to prohibit people from openly carrying, a particular concern discussed last week.

Another proposed change is related to law enforcement's ability to verify that someone is legally allowed to carry openly. The amendment would further specify in law that law enforcement officers are allowed to demand someone display their concealed weapons license and that a person's refusal to do so "constitutes reasonable suspicion that a crime is being committed."

Among their many concerns, Democrats feared the legislation as-is would have a chilling effect on law enforcement, because it includes language allowing them to be sued if someone feels their right to bear arms had been violated.

Four amendments were withdrawn after 11 p.m. Monday: Three by Moskowitz that would've required the state to check whether someone is on the federal no-fly list before issuing them a concealed-weapons permit, and a rebuttal by Gaetz that would make people charged with terrorism under federal law "ineligible" for a weapons permit.

Prior to the House session, proponents and opponents are trying to rally supporters to put pressure on lawmakers.

Tallahassee Mayor Andrew Gillum plans to join the League of Women Voters for an afternoon press conference at Tallahassee City Hall, near the Florida Capitol, in opposition to the open-carry legislation.

In contrast, Florida Carry, Inc. issued a call to action Monday afternoon, decrying the Democrats' proposed amendments as "a freedom-hating tantrum" and urging its 37,000 members to contact state lawmakers and urge them to vote down the "anti-gun amendments."

One amendment has been filed, by Miami Democratic Rep. Jose Javier Rodriguez, although he said on Twitter it was "in jest" to prove how much of a "bad idea" the proposal is.

The debate over the guns-on-campus measure is somewhat less heated at this stage, because the proposal has stalled in the Senate, all-but-killing its chances at becoming law this year.

Judiciary Committee Chairman Miguel Diaz de la Portilla said two weeks ago he won't schedule a hearing on it. Proponents are hoping to use some legislative maneuvering to get around his decision, but Senate leadership said that wouldn't be well-received.

Diaz de la Portilla said previously he would hear the open-carry bill -- the Senate version of which also awaits a hearing in his committee. But he indicated last week he could be changing his mind on that, depending on whether certain amendments are accepted on it in the Senate.