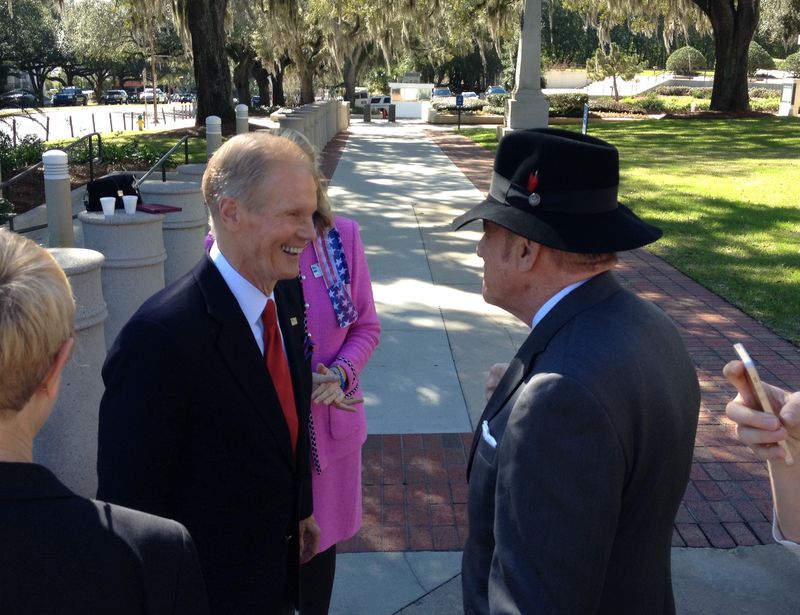 U.S. Sen. Bill Nelson was back in Tallahassee on Wednesday meeting with top elected officials and weighing in on a wide range of political issues.

Before scheduled meetings with Senate President Andy Gardiner, R-Orlando, and Florida Agriculture Commissioner Adam Putnam, Nelson, a Democrat, started the day at a rally with the League of Women Voters to celebrate their court victory over the Florida Legislature, which forced lawmakers to redraw Senate and Congressional district lines. Nelson told more than 100 people at the rally, that they've made Florida elections more fair by their refusal to give up.

Nelson later met with state Senate Democrats where he told them he expects their numbers to grow because of the court decisions. Democrats currently have 14 of the 40 seats in the Florida Senate.

He specifically signled out the work of state Sen. Arthenia Joyner, D-Tampa, for her work on legislation related to the Dozier School for Boys in the Florida Panhandle. Joyner is expecting a final committee hearing on Thursday on legislation that would set aside $500,000 for the state to pay for burials of remains of children found in unmarked graves at the former state-run reform school. It also orders the state to create a commission whose goal will be to create some sort of memorial to acknowledge what happened at the school.

Nelson said Joyners legislation promises to "give dignity to those little boys who died" in what Nelson called a "dungeon" and a "torture chamber."

Nelson also used the day to call out the Legislature for promoting legislation to open the state to fracking and another that could allow people to openly carry fire arms. Nelson urged Senate Democrats to continue to fight both efforts, which he said are bad for Florida.

Nelson's visit comes at a time speculation is growing that Gov. Rick Scott is interesting in running against Nelson in 2018 for the Senate seat. Nelson has held the seat since 2000. Scott, a Republican, faces term limits in 2018 and cannot seek re-election as governor.

Nelson is no stranger to Tallahassee. His political career began in the Florida House in the 1970s and served in the 1990s as the state's then-elected state insurance commissioner.