« Senate panel OKs death penalty fix with historic decision on juries | Main | Gay man asks Marco Rubio, 'Why do you want to put me back in the closet?' » 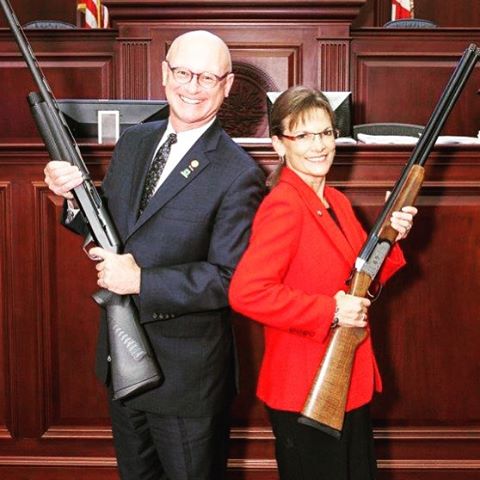 About an hour before the Florida House was due to meet for daily session on Wednesday and vote on two controversial gun bills -- including one over open carry -- Sen. Denise Grimsley, R-Sebring, and Rep. Cary Pigman, R-Avon Park, walked onto the chamber floor so they could have their photo taken together.

The scene wouldn't have been so unusual had it not been for the props each carried: Longarm shotguns.

Pigman told the Herald/Times on Monday about the "very innocuous, homespun, country backstory" of why they had the shotguns. And both he and House spokesman Michael Williams said the lawmakers had permission to have them in the House chamber.

It was simply a "playful" way to highlight Grimsley's and Pigman's competition in an upcoming clay-shooting competition where they're raising money for a local hospital in their rural, central Florida districts, Pigman said.

Williams noted the photo shoot happened before the start of the daily session and that the Florida Department of Law Enforcement -- which oversees Capitol Police -- "was involved with inspecting and securing the firearms. They were not loaded."

Pigman, an emergency room doctor, and Grimsley, an emergency room nurse, have been friends for many years after working in the same hospital, Pigman said. They've had an ongoing rivalry in clay-shooting, which Pigman said is a common way to raise funds for charitable causes where they live.

Pigman said his niece, a hospital foundation director, suggested the idea of a photo demonstrating the lawmakers' throw-down to benefit the Florida Hospital Heartland Division Foundation. He said he and Grimsley had intended to take the photo outdoors, but it was overcast on Wednesday in Tallahassee so they asked and received the House sergeant-at-arms' approval to do it in the House chamber.

Open carrying of firearms isn't allowed in Florida (although a bill the House voted on later Wednesday afternoon seeks to change that). Only gun-owners with concealed-weapons permits can carry concealed weapons in the Florida Capitol. Official legislative meetings are one of about a dozen locations in state law where even concealed weapons are prohibited.

Gretl Plessinger, spokeswoman for FDLE, would not comment definitively on whether Pigman's and Grimsley's carrying of shotguns in the state House chamber is allowed under Florida law. She said that "firearms are permitted in the Capitol for citizens with a concealed weapons permit."

Pigman said it was "ironic" and "entirely accidental" that their photo shoot came the day of the chamber's votes on the open-carry and campus-carry bills.

The brief photo shoot was observed by a few reporters working in the press gallery above the chamber. A chosen photo from it was published Friday on the Senate Republicans' Instagram account and the chamber's main homepage at flsenate.gov.

However, the image was removed from both sites late Monday afternoon, shortly after the Herald/Times inquired about it.

Senate spokeswoman Katie Betta said she took down the photo out of concerns it "could cause confusion for other Senate constituents who visit the website and follow social media accounts associated with our Senate offices."

Here's how the photo previously appeared on the Senate homepage, when clicked on under the "recent posts" header.