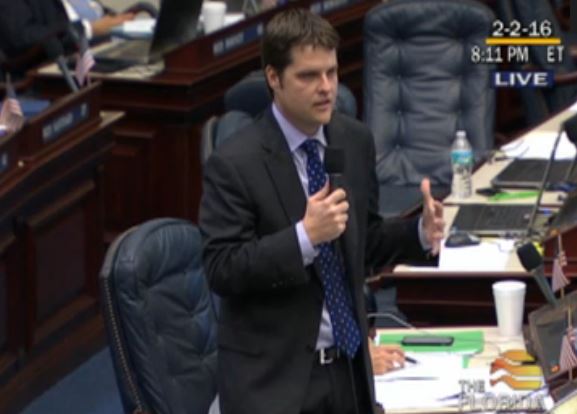 Florida's 160 lawmakers could inconspicuously pack heat in the state House and Senate chambers and legislative meetings, under a provision tacked on to a controversial open-carry handguns proposal that's expected to pass the Florida House on Wednesday.

The amendment by Rep. John Wood, R-Winter Haven, was one of almost two dozen proposed changes that representatives vetted -- and a handful they approved -- during three hours of debate that stretched past 9 p.m. Tuesday over two high-profile gun bills.

The measures alter how 1.4 million people with concealed weapons permits in Florida can carry handguns.

The Republican-dominated House accepted Wood's idea by a 72-43 vote to allow lawmakers to carry concealed guns in legislative sessions and official meetings, but it's possible the change could prove fatal for the measure, which already faced a tough climb in the Senate.

Both the open-carry measure and another that would allow permit-holders to carry concealed on public university and college campuses are likely to pass the House. But across the Capitol, Senate Judiciary Chairman Miguel Diaz de la Portilla, R-Miami, said he won't hear the campus-carry proposal in his committee for the second year in a row, and he indicated last week he could change his mind and not hear the open-carry plan, either.

The two measures are endorsed by the National Rifle Association and other gun-rights groups, but opponents cite numerous safety concerns.

Heading into Tuesday's House debate, more than 40 amendments were filed to the open-carry bill but almost half were later withdrawn; those were mostly rebuttals that bill sponsor and Rep. Matt Gaetz, R-Fort Walton Beach, initially sought.

All but one of the others -- Wood's -- were filed by Democrats, as an attempt to chip away at the proposal and add exclusions to where concealed-carry permit-holders could openly carry. Each Democratic amendment failed by wide margins with almost entirely Republican support.

The Democrats' suggestions included measures to:

-- and prohibit the open-carrying of handguns within 500 feet of movie theaters, religious institutions, voting locations, school safety zones and bars or restaurants that serve alcohol.

To plead their case of why the safeguards were needed, Democrats invoked several mass-shooting incidents from recent years. Among them: the San Bernardino, Calif., shooting two months ago, the Charleston, S.C., church shooting last summer, the Aurora, Co., movie theater shooting and Sandy Hook Elementary School shooting in Newtown, Conn., both in 2012, and the attempted assassination of an Arizona congresswoman in 2011.

Republicans and moderate Democrats said the incidents cited weren't relevant to the debate and they rejected the amendments as unnecessary, redundant or an infringement on residents' Second Amendment rights.

"This amendment has nothing to do with what happened at those particular places or those particular tragic incidents. No open carry was at issue there," Rep. Michelle Rehwinkel Vasilinda, D-Tallahassee, said of the proposed restriction near churches. She co-sponsored the campus-carry bill.

Gaetz has promoted his open-carry bill as a means to "vindicate" Floridians' Second Amendment rights. The Florida Police Chiefs Association supports it, but groups representing sheriffs and police officers are opposed.

Critics argue that having Florida join 45 other states that allow open carry could harm its tourist industry and subject residents to "intimidation" when gun-owners carry in public.

The measure was earlier amended to specify the right of private property owners -- from grocery stores and churches to Disney World and Sea World -- to decide whether to allow patrons to carry weapons concealed, openly or at all.

Republicans argued that provision was sufficient to ease opponents' concerns about where people might openly carry, but that only frustrated Democrats further.

"We’ve become so inflexible on this issue that we can’t even agree that guns don’t belong within 1 foot of a church," said Rep. Jared Moskowitz, D-Coral Springs, who sponsored most of the Democratic amendments. "It’s OK to infringe on the right to bear arms at Disney World -- you’re all OK with that -- but you’re not willing to do it within 1 foot of a church."

Among the approved amendments, though, was a compromise offered by Gaetz that addressed one concern Democrats discussed last week in committee; it would allow public hospitals to restrict guns from being openly carried.

Wood said he sought the conceal-carry exemption for lawmakers because "we allow the judiciary -- an equal co-branch of government -- to have that privilege."

"It should be enjoyed by duly elected officials, such as ourselves," he said.

Rep. Greg Steube, R-Sarasota, filed a related bill this session to lift restrictions and let all legally permitted gun-owners carry concealed in most any government meeting at the local, county and state level but it hasn't been heard.

Earlier in the evening, House members also debated the so-called "guns on campus" bill by Steube and Rehwinkel Vasilinda, which is on track to stall for the second year.

Steube spent an hour answering questions from more than a dozen lawmakers, most of them Democrats. Their questions targeted the safety of allowing guns on college and university campuses -- environments, they argued, that can include parties with alcohol and potentially drugs, young adults facing mentally and emotionally stressful situations and children who attend daycare, camps or charter school programs.

"I think that people should have the right to defend themselves, and our gun-free zones have shown themselves to be targets time and time again for terrorists and mass shooters," Steube said.

He added that he's not "not trying to deputize or have a quasi-police force in concealed permit holders." He dismissed assertions that law enforcement wouldn't be able to tell "good guys" from "bad guys" in active-shooter situations, because he said officers are trained to know the difference.

College and university presidents and police chiefs resoundingly oppose the proposal, as do some faculty and student groups and the League of Women Voters. But Steube said he's heard from professors, staff and students who want it.

In responding to questions, Steube said multiple times that he knows of no data that proves allowing concealed guns on campuses would increase crime.

He rejected that the bill would impose costs on colleges and universities, although those institutions have said they'd have to spend tens of millions of dollars to beef up security and training for campus police forces, should the proposal become law.

Steube twice deflected questions about what impact his bill would have if it and Gaetz's open-carry measure were both enacted, but Gaetz later addressed it.

"Yes, under those circumstances, it would be permissible to have open carry on campus," Gaetz said.