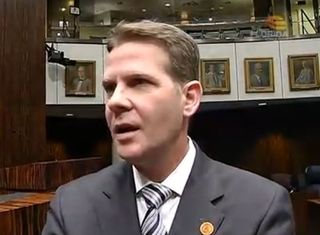 As rank-and-file senators grow more worried that a controversial teacher bonus program could be slipped into the annual budget for the second year in a row, Senate President Andy Gardiner said this evening he endorses that approach as a possible "appropriate" compromise with the House.

"It was in the implementing bill last year. I think it’s an issue that’s very important to the speaker-designate (Rep. Richard Corcoran), and it’s not a new issue," Gardiner, R-Orlando, said of the "Best & Brightest" program that awards bonuses to "highly effective" teachers based on their high school SAT/ACT scores.

"Maybe that’s the compromise -– where instead of codifying it in statute in Senate Bill 524, it’s a one-year implementation," Gardiner said, referencing a massive education bill that includes permanently extending the bonuses.

"I think that might be appropriate, but I’ll leave that to the chairs to see if they want to do that," he said.

To the frustration of some of his fellow senators (Republicans and Democrats), Lee said earlier this week he "absolutely would" consider extending the teacher bonuses for another year through implementing language -- which was how the program was enacted last year. Lee said Corcoran "deserves some deference" on his priorities, as the Senate does their's.

When asked whether the Senate should grant an up-or-down vote to the controversial policy, Gardiner told reporters: "If it’s in the budget, there will be a floor vote."

The $44 million program is a top priority for the House, where leaders argue it's a retention and recruitment tool for promising teachers. (The House approved an education bill in February that includes permanently extending the program.)

But many teachers statewide -- including the state's largest teachers union, the Florida Education Association -- don't like it; they say it discriminates against older teachers and those who are minorities.

Senators also have been reluctant to embrace it because there's no proven correlation between teachers' high school exam scores and their ability to be effective teachers.

Some senators have said this week they believe they have the 21 votes necessary to kill the policy if it were to come up for a floor vote.

Amendments have been filed to SB 524 to either strip the program from the bill altogether, or to change the eligibility criteria for teachers. SB 524 -- led by Sen. Don Gaetz, R-Niceville -- has been postponed for the past three days, so it's uncertain whether it will come up at all before session ends next week.

In a sign that it could be stalled, Gaetz on Friday duplicated some of his own top priorities from that bill onto another sweeping education bill (HB 7029) he has, which senators are poised to vote on on Monday.

An opportunity presented itself Friday to attach "Best & Brightest" to that bill, too -- more as a political maneuver to fix the problems critics have with it and to force a floor vote on the issue.

Sen. Darren Soto, D-Orlando, filed the amendment, which senators debated for about 10 minutes before Soto withdrew it.

Soto told the Herald/Times after the day's session that he wanted to have a "meaningful" discussion on the floor, but "a lot of the members who are in opposition to 'Best & Brightest' -- including myself -- felt like we wouldn't be benefited by having a vote at this time today."

"It is key, though, that we continue to express a concern, because if it ends up on the implementing bill, it's just an up-or-down vote," Soto said. "This will be the first of potentially other times where we bring it back up."

For the past week, Sen. John Legg, R-Trinity, has also been a consistent critic of Senate leaders' willingness to extend "Best & Brightest" simply through budget language.

"I think that’s going outside of the process. Implementing bills are designed for budget issues, not to resolve controversial policies that aren’t brought up on the floor," Legg told the Herald/Times earlier Friday. "They’re expanding on a dangerous precedent that President Haridopolos started in 2011, and that does not bode well for the process."

Former Senate President Mike Haridopolos, a Republican, was widely criticized at the time for agreeing to enact dozens of policies through implementing bills at the end of session.