Heidi Cruz will fundraise for Ted Cruz in Miami 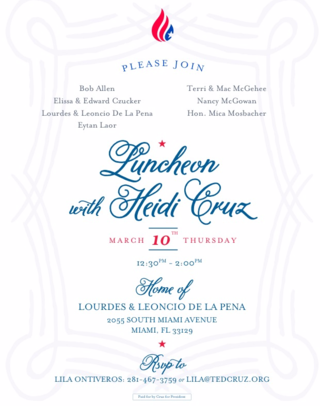 Ted Cruz is deploying his charismatic wife as part of his Florida campaign push.

Heidi Cruz will be the featured guest at a fundraising luncheon Thursday in the Miami home of Lourdes and Leoncio de la Peña.

The suggested contribution is $1,000 per person.

Hours after the event, her husband is schedule to take the stage as part of a Republican presidential debate at the University of Miami.

"Heidi Cruz is a brilliant lady. She would be a spectacular First Lady," Lourdes Castillo de la Peña told the Miami Herald. "In the Republican Party, we've had candidates that don't necessarily appeal to the professional conservative women."

Castillo de la Peña, a former head of the Florida Commission on the Status of Women, had been prodding the Cruz campaign to bring the candidate and his wife before Miami voters. The luncheon was in the works late last week when the campaign announced it opened 10 offices across the state.

A super PAC backing Cruz has also produced several TV ads that may run in Florida.