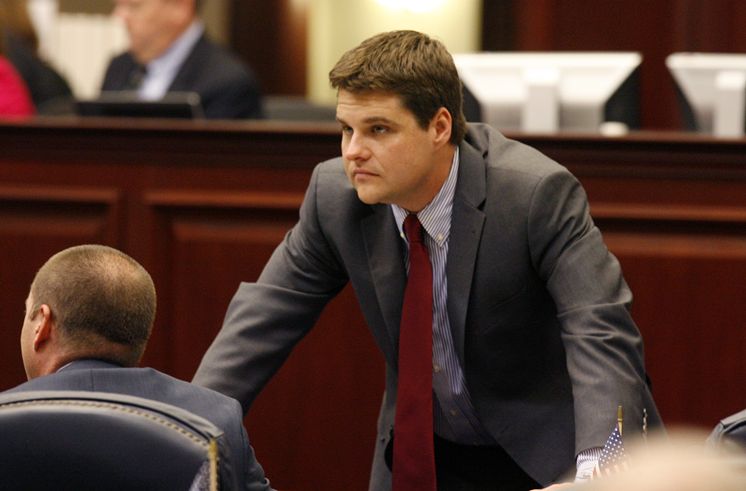 State Rep. Matt Gaetz is forgoing his bid to replace his father in the Florida Senate and is, instead, now running for U.S. Congress.

Gaetz announced his congressional campaign this morning with a 30-second Facebook video and a rebranded mattgaetz.com, with the slogan: "Fight Washington, Restore America."

"It isn’t too late for America to get back on track," Gaetz says on his website. "We’ve taken some hits with Obamacare, the Iran deal, and illegal executive actions, but I know we can reverse those decisions and get real solutions. I will work hard to bring back the conservative principles this country was founded on, and I won’t stop working until it happens."

Gaetz registered his campaign with the Federal Election Commission on Sunday, so he can begin fundraising immediately.

Gaetz, a commercial litigator, has been a staunch conservative in the state House in the past six years. During the 2016 session, he was involved in some of the most contentious and high-profile issues the Legislature discussed, such as medical marijuana, tax cuts, fantasy sports, Uber regulations, and advocating for the open-carrying of handguns in Florida.

Gaetz had been in a hotly contested primary race against Bay County Commissioner George Broward Gainer to fill Don Gaetz's seat in the state Senate next year. Matt Gaetz and Gainer combined had raised over $1.6 million in that race. (Don Gaetz is term-limited.)

Matt Gaetz's departure from the Senate contest all-but hands the Republican-heavy seat to Gainer. In the 2012 presidential race, Mitt Romney took the district with 74 percent of the vote.

The congressional contest should be an easier battle for Gaetz, but he still might face stiff competition. As of Friday, current state Sen. Greg Evers, R-Baker, had also been weighing a run for Miller's seat.

"While I planned to continue serving in the Florida Legislature, the fights we must win to save this country are in Washington," Gaetz said in a statement announcing his campaign. "When Donald Trump is president, Northwest Florida’s voice in Congress must ring loud and clear for bold, conservative reform. Mine will."