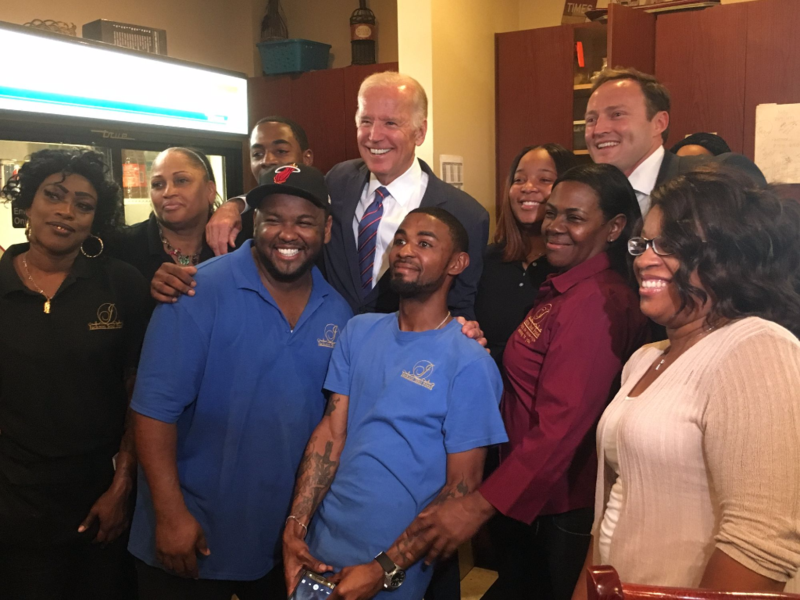 But U.S. Rep. Patrick Murphy of Jupiter had one of the Democratic Party's biggest guns in town Monday for a fundraiser: Vice President Joe Biden. So Murphy asked Biden to pull double duty and join him after the fundraiser at a stop at Jackson Soul Food, a culinary institution in Miami's Overtown neighborhood.

Lesson one for Murphy: No politician works a room quite like Biden.

He scooped up a little boy, who squealed with delight. He kissed a baby. He posed for photographs. At one point, Murphy offered to take a photo of the VP and a diner himself, before a Biden staffer jumped in to ensure Murphy was in front of the screen, not behind it.

"Say hello to Patrick," Biden said, trying -- unsuccessfully -- to keep the focus on Murphy. "He's a great congressman, and he's going to be a great senator." Later, he told another table, "He's my guy. And you know where my heart is." Before anyone could make a crack about Murphy's young age -- he's 32-- Biden mentioned he was first elected to the Senate when he was 29. "He's old!"

Standing before a small scrum of reporters, Biden spoke about the importance of Florida's swing Senate seat -- and the state's role in the November presidential election.

Most of the late lunch crowd knew little -- if at all -- about Murphy, or about the seat he's trying to fill.

"Marco Rubio's?" Tyrell Steward, a 35-year-old longshoreman, correctly. "I haven't paid attention to that," he admitted, though he chided Rubio, a Republican, for being too focused on running for president.

"If you're going to be a senator, you're going to help everybody," he said. "His focus was just on his people." Steward, a Demcorat, voted for Bernie Sanders in the March 15 Florida primary that ended Rubio's candidacy.

Polls show none of the Senate contenders are well known. Murphy is up against U.S. Rep. Alan Grayson of Orlando in the August primary; the five Republicans vying for the seat are Lt. Gov. Carlos Lopez-Cantera, U.S. Reps. David Jolly and Ron DeSantis, Orlando defense contractor Todd Wilcox and Sarasota builder Carlos Beruff.

Jackson Soul Food, with its framed photographs of past visits by Bill Clinton and Barack Obama, seemed like a good place for a Democrat to start to change that. After Biden arrived, two elected officials -- Miami-Dade County School Board member Dorothy Bendross-Mindingall and state Rep. Barbara Watson -- showed up. Former Miami City Commissioner Michelle Spence-Jones, who represents the restaurant in a county contract deal, brought out the kitchen staff to say hello to Biden (and Murphy).

On their way out the door, the locals implored Murphy to return, even without the VP in tow.

Neil Shiver, of Overtown's Community Redevelopment Agency, called out: "Don't forget about us!"