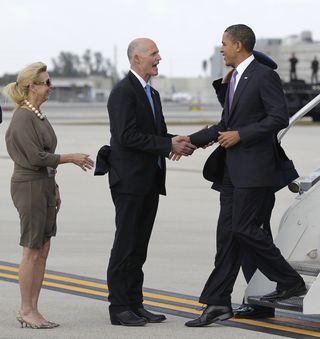 “Following the gruesome terrorist attacks in Brussels earlier this week, President Obama chose to continue gallivanting across the communist country of Cuba with the Castros," Scott said in an official statement from his office. "Now, he is dancing the tango in Argentina." (A note: Obama only met with one Castro in Cuba -- the country's president, Raúl.)

Obama had been in Cuba for a historic visit to open up relations with the country. Now, he's in Buenos Aires meeting with Argentine leaders.

Other critics have suggested Obama should go to Brussels or return to the U.S. But Scott took it a step further, requesting that the president come to Florida to assuage tourists' fears about traveling to Europe.

"As the tourism capital of America, in Florida, we understand how important it is to communicate effectively about any safety concerns to tourists," he said. "It is time for him to return home and lay out for the American people how he will combat terrorism in a way that will not only keep Americans safe at home, but also as they travel abroad. Florida is the perfect place for this address."