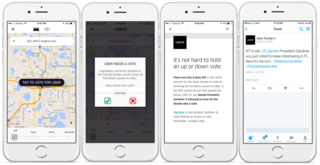 Uber is doubling down on its campaign targeting Senate President Andy Gardiner with just five days left in the legislative session.

The company wants the Florida Senate to approve legislation preventing local governments from banning or regulating it and other ridesharing companies like Lyft.

In an effort to ramp up public pressure, Uber's smartphone app is this morning prompting users to "vote for Uber," and asking them to vote yes or no on a simplified version of that part of the legislation. "It's not hard to hold an up or down vote," the app will retort.

The feature is launching in Tallahassee and Orlando, which is Gardiner's hometown, but the company intends to roll it out statewide throughout the day.

It's part of a bigger PR blitz the company has taken against the Senate president in the last week in an attempt to force a vote on their favored legislation (HB 509) before state lawmakers finish their work in Tallahassee on Friday.

In addition to stopping local governments' bans, the ridesharing legislation would set insurance and background check requirements. It passed the Florida House on a 108-10 vote in January. Opponents

However, Senate leaders have been reluctant to preempt local governments, instead favoring a plan backed by the taxicab industry that would focus on insurance. Gardiner has ties to Mears Transportation, a taxi and limo operator in Orlando.

For its part, Uber has flooded Tallahassee with 30 registered lobbyists.

The Senate's point person on ridesharing, Rules Chairman David Simmons, R-Altamonte Springs, said Friday that he's working with taxi and ridesharing companies to find an agreement, although previous deals have broken down.

"If we can get the consensus, we'll be on our way," he said. He indicated that a compromise being worked out over the weekend would include "some" local government preemption.